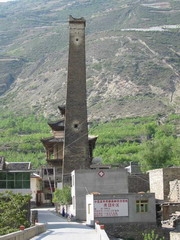 unique cultural background all attribute to the well-developed culture of Rock Buildings in Danba. Old Diaolou Buildings have a long and colourful history, and represent the masterpieces of Jiarong Tibetan architectural arts. Danba tops China, or even the world in terms of its quantity, density and types of old Diaolou Buildings. So far, it is the place that reserves the largest quantity of old Diaolou Buildings and villages in China, with the highest density, and is known for its rich styles and overall preservation.

The history of Danba can be traced back to Qin and Han Dynasty. According to The Record of Southwest Minorities, Southern Minorities in The Post Han Script, Ranmang People were conquered by the Emperor Hanwu. In the 6th year of Yuanding, it was named Wenshan Shire... (Its people) all inhabit the mountains, and reside houses of rocks and slates. The maximum height of the house points over 30 meters. These folk houses were referred to as Qiong Hutches. In Tang Dynasty, Xian LI noted that, 'Today, the minorities called it Diaolou Buildings.' In Sui and Tang Dynasty, such rock towers prevailed in the west of Sichuan and east of Tibet. The excavation of the ruins and stone coffins at the graveyards at Zhonglu proves that, over 5,000 years ago, the area was densely populated by primeval people, who had mastered fairly advanced technique of building with rocks.

The old watchtower takes up an area of 25~120 m2, with a height varying from 10 to 60 m. Mountain rocks and slates, yellow mud and timber are adopted as the main building materials. With a relatively bigger base, the Diaolou Buildings narrow upward to the top. The towers were built with rocks and slates of various sizes. As many walls were built with rocks weighing over several hundred kilos, the walls prove firm, thick and solid. They are built with well-leveled surface and pointed corners, making the tower stand straight and upright. The function of the old Diaolou Buildings varies, combining military and residential purposes. They fall mainly into two categories: folk towers and residential towers. By its own particular function, they can be further labeled as war flame tower, strategic pass tower, official 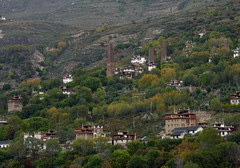 village tower, boundary tower, scripture tower, and tower in houses, etc. The old Diaolou Buildings in Danba have survived wars, weather, and earthquakes. With a long history, they rise straight from the land, towering loftily, solid and strong as usual. Some of them stand as bows, forming quite marvelous spectacle, making one amazed at its refined and intricate arts of building. In 2006, the old Diaolou Buildings in Danba were enlisted as the Cultural Relics of National Importance by the State Department.

The Tibetan folk houses in Zhonglu, Suopo, especially Jiaju, can best represent the extant form of folk houses in Danba, preserving integrally the basic features of Jiarong folk houses. They adopt local materials and primal techniques, keeping the historical style and features. The development of history is also embodied in details, which do not affect its traditional style and basic pattern.