The treasury in Dege sutra-printing house 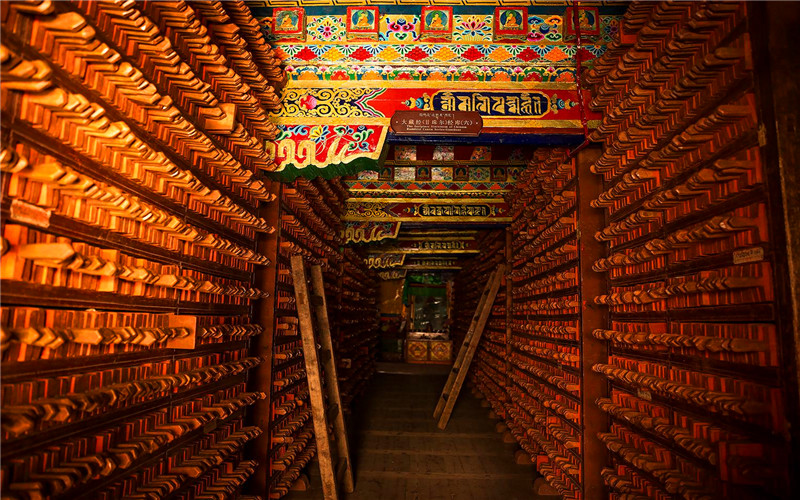 kinds: Kanjur, Tanjur, selected works, book series, comprehensive and separate editions of The Tri-pitaka In Tibetan (The Great Tibetan collection). All the book editions are divided into two types in terms of colour: the ink edition as the main and the cinnabar edition which is limited to Kanjur, The 100000 Pratantras, The Eight Thousand Eulogies of Prajna-Paramita Sutra and Tanjur: The Stotra Unit (Praises to the Buddhas). But in terms of size they are divided into three types: the 'arrow-stick' edition whose length is about 60~70cm equal to the length of an arrow-stick and whose breadth is about 11~18cm; the 'elbow' edition which is about 40~50cm long equal the length of an average human elbow and 7~10cm broad; and the 'small' edition about 30cm in length and 5~6cm in breadth. The thickness of the above three editions is 2~3cm with the top having a 10cm-long handle for easier removal. The book edition of a part (volume) is cut on both the positive and negative side and each block of book edition has two leaves while the lines of words on each leaf are usually decided by the part (volume), mainly being 4,5,6,7, and 12 lines/leaf with the 4, and 6 lines/ leaf as the main and the 12 lines/leaf for The Eight Thousand Eulogies of Prajna-Paramita Sutra only. The book editions are not short of many rare and precious editions, unique copies or model copies like The Filiation of Indian Buddhism, The Origin and Development of Buddhism in the Han Region, Gyusyi, The Eight Thousand Eulogies of Prajna-Paramita Sutra, The Great Tibetan collection (the joint name of Kanjur and Tanjur) and so on. The painting editions originally kept in Dege Sutra-Printing House were 376 blocks and 677 blocks were added after 1980, They are divided into three big types: the Thangka painting edition, the Mandala painting edition and the Tibetan Prayer Flags (Wind-Horse) painting edition, of which Thangka is the largest in size, Mandala the next and Tibetan Prayer Flags the smallest. Most painting editions are one-side cut with a few being dual-side cut and most of them are ink-editions except a few which are cinnabar-printed. Their major subject-matters are Buddhas, Bodhisattvas, Arhats, Dharma-Protectors, eminent monks of Tibetan Buddhism and historical figures etc., whose artistic expressions mainly belong to the artistic style of the Karma Gadri Painting Style of Dege Especially, the integration of the traditional Tibetan painting Thangka with block-printing is an important breakthrough and innovation of the block-printing editions of Dege Sutra-Printing House. Representative works include The 12 Changes of Sakyamuni. The Preaching of the Incarnated Sakyamuni, The Arhats, The Eight Main Forms of Padmasambhava and The Subjugation of Monsters and Devils by King Gesar etc., Besides painting editions there are also not a few book edition illustrations on both sides of the title page or the flyleaf. They are usually of Buddhas, Bodhisattvas, Arhats, Dharma-Protectors based on the contents of the book or of the portraits of the writer or translator. The most typical are the illustrations in The Eight Thousand Eulogies of Prajna-Paramita Sutra with almost every page having illustrations on both sides of the words which total over a thousand including the portraits, besides those of the Buddhas, Bodhisattvas, Dharma-Protectors of great Buddhist scholars, great translators and Adepts (Mahasiddha) of various generations of India and other countries, providing really valuable materials for study.

The mural paintings of Dege Sutra-Printing House cover an area of 950 square metres of which 95% belongs to old paintings and the rest to new creations. They are mainly distributed in the Sutra-halls of various sizes and on the upper part of the walls outside the Sutra-keeping house .All the paintings are works of the 'Karma Gadri' Painting school except one Green Tara belonging to the early 'Men' school. As to the artistic style of these paintings, as summarized by Situ Chokyi Jungne, the stroke and colour application of the 'Karma Gadri' school has absorbed the style of fine brushwork painting of the inland while applying Indian painting style in the layout of special environment. In general, they have succeeded the tradition of the 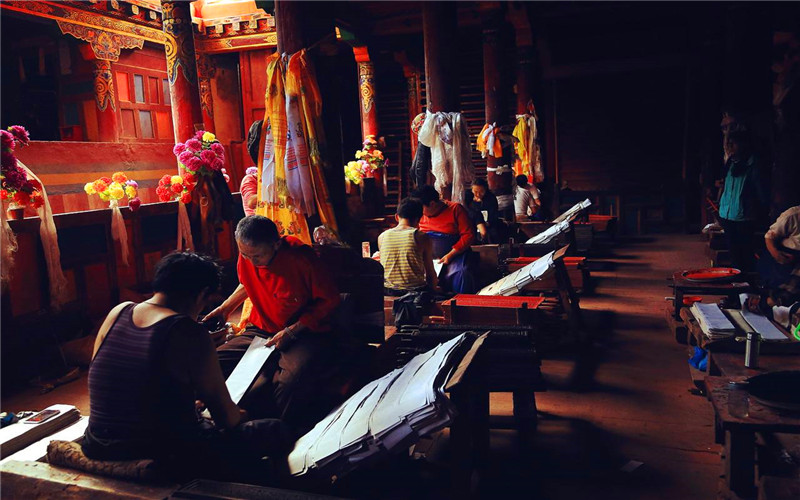 'Man' and 'Qin' schools, having at the same time the advantages of the above three styles and a clear feature of their own. For instance, their human profiling is rich and colouring clear-cut and elegant to give the whole painting a strong subject sense. The main deities of paintings are mainly Buddhas, Bodhisattvas, Arhats and Dharma-Protectors etc., Representative works include The Sakya Buddha in the lower storey of the grand Sutra-hall and The Buddhist Stories in lower storey of the lesser Sutra-hall.

There are many clay-sculptured Buddhist statues in the grand and lesser Sutra-halls. Of the 14 statues in the grand Sutra-hall the principal deity is Buddha Sakyamuni and on both sides are Vajrapani, The hands Avalokitesvara, Buddha Amitabha, Padmasambhava, Manjusri, Green Tara, Tsongkhapa, Sakya Pandita Kunga Gyaltsen, LongQin RunJunpa, Milarepa,Tangtong gyalpo, Situ Chokyi Jungne and Chokyi Tenpa Tsering respectively. And the 61 statues in the lesser Sutra-hall mainly represent one Buddha and two disciples, Bodhisattvas, Arhats, Dharma-Protectors, Padmasambhava and his eight forms, and his two consorts: Mandarava and Yeshe Tsogyal, and the founders of the Er sect a branch of the Sakyapas.

The main building of Dege Sutra-Printing House covers an area of 1632 square metres with a total construction area of 5886 square metres. The House, facing south, is a courtyard-styled construction complex and an integration of Dege temple and popular residence bearing a strong flavour of traditional Tibetan architectures. The beams, columns, pillars, rafters, doors and windows of the building are all well carved and decorated with coloured paintings. It already has a history of 270 years.

Apart from the abovementioned relics the House also owns a few other valuable cultural relics such as gold-gilded bronze Buddha statues, classic literatures written in gold or silver, ancient instruments and Thangka paintings.