Dartsendo (Kangding) is a fairly big town nestled in a steep river valley at the confluence of the swift Zheduo and Yala Rivers, known as the Dar and Tse in Tibetan. If you`re en route to western Sichuan, it`s worth staying for a few days to take in the sights and check out some of this dreamy scenery. Towering 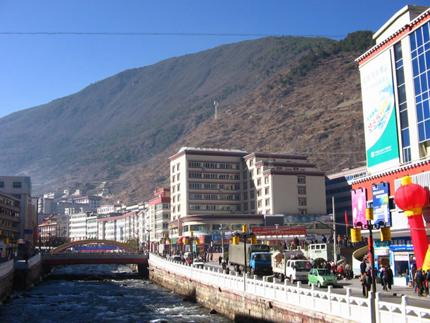 above Dartsendo (Kangding) is the mighty peak of Minya Konka Mountain (7555m).

Arriving in Dartsendo (Kangding), there is a tangible sense that you`ve reached the end of the Han Chinese world and the beginning of the Tibetan. The town has been a trade center between the two cultures of centuries with the exchange of yak hides, wool, and Tibetan herbs and, especially, bricks of tea from Ya`an wrapped in yak hide. It also served as an important staging post on the road to Lhasa, as indeed it does today. Dartsendo (Kangding) was historically the capital of the local Tibetan kingdom of Chakla and later, from 1939 to 1951, the capital of the short-lived province of Xikang.

In Dartsendo (Kangding), you`ll still see plenty of Khambas down from the hills shopping or selling huge blocks of yak butter in the market, and spot monks wandering around town in crimson robes.
Dartsendo (Kangding)`s biggest annual festival is on the 8th day of the 4th month of the Chinese calendar, and features activities on Racehorse Hill, plus ten days of street fair that fills up the whole town. In Dartsendo (Kangding) you should drop in on the Dartsendo (Kangding) Nationalities Handicraft Workshop, located on the same street as the bus station, on the opposite side, a few minutes` walk 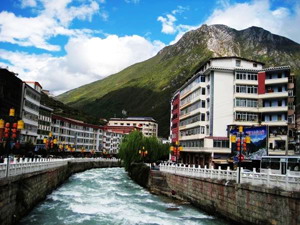 toward the center of town. They have a small showroom downstairs; go upstairs to see craftsmen at work making traditional Tibetan jewelry, household items such as tea churns, and Buddhist ritual items.

While staying in Dartsendo (Kangding) town, you can stretch your legs on Guoda Mountain, a good warm-up if you`re planning serious trekking or climbing later on.
A good, calming place to hang out and find English-speaking locals is the Jiangshan Tea Garden. It is run by Mr. Ang Luo, who used to live in the U.K. for a while and speaks pretty good English. To find his teahouse, as you exit the big Dartsendo (Kangding) Hotel, go out past the monastery on your left, and make a left turn onto the big street paralleling the river (do not cross the river). Walk down for about ten minutes until you come to a really big street coming in from the left. On the corner on your left hand is the tea garden, which is reached by going into the lobby of a fairly anonymous looking building and making a sharp right turn once inside.