The Qiang ethnic minority has a population of 306,072 who mostly dwell in hilly areas, crisscrossed by rivers and streams, in the Maowen Qiang Autonomous Prefecture in Sichuan Province. A small number live with Tibetan, Han and Hui ethnic groups in such localities as Wenchuan, Dali, Heishui and Songpan.

They occupy a fertile land of mild climate and adequate rain. The mountain slopes are natural pastures. The area abounds in precious Chinese caterpillar fungus, bulb of fritillary, antlers, musk and bear's gallbladders, which are used for medicine. Deep in the forests are such rare animals as giant pandas, golden monkeys and flying foxes. The region is also rich in iron, coal, crystal, mica and plaster stone deposits.

History
'Qiang' was a name given by ancient Hans to the nomadic people in west China. The Qiangs were not a single distinctive ethnic group then. According to historical records, a clan group made their homes in what is today's Sichuan Province. The Han Dynasty (206 B.C.-A.D. 220) court in the 2nd century had set up an administrative prefecture for the area. During A.D. 600 to 900 when the Tibetan Regime gradually expanded its rule over the region, some Qiangs were assimilated by the Tibetans and others by the Hans, leaving a small number unassimilated. These developed into the distinctive ethnic group of today.

The Qiangs do not have a written script of their own. They speak a language belonging to the Tibetan-Myanmese language family of the Chinese-Tibetan system. Owing to their close contact with the Han 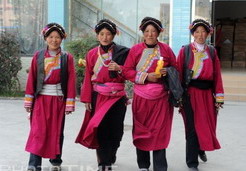 people, many Qiang people speak Chinese, which is also the written form for this ethnic group.

The Qiang and Han peoples have had time-honored close political, economic and cultural ties. Administratively, Han courts from the Qin, Han, Sui and Tang dynasties down to the Ming Dynasty all had political units in the Qiang-occupied areas. In the early Qing Dynasty (1644-1911), the system of appointing local hereditary headmen by the central authority to rule over the Qiangs gave way to officials dispatched from the court. The central administrative system helped enhance the ties between the Qiang and Han ethnic groups. With their horses, medicinal herbs and other native produce, the Qiangs used to barter farm implements and daily necessities from the Hans. Mutual support and help stimulated the social and economic development of Qiang society.

Life Style
The Qiangs dress themselves simply but beautifully. Men and women alike wear gowns made of gunny cloth, cotton and silk with sleeveless sheep's wool jackets. They like to bind their hair and legs. Women's clothing is laced and the collars are decorated with plum-shaped silver ornaments. They wear sharp-pointed and embroidered shoes, embroidered girdles and earrings, neck rings, hairpins and silver badges.

They live in blockhouses made of piled up stones of different sizes. Unique in style, solid and practical, these houses are two or three stories high. The first floor is for livestock and poultry, the second retained as bedrooms and the third for grain storage. The Qiang people are skilled in opening up roads on rocky cliffs and erecting bamboo bridges over swift rivers. The bamboo chain bridges they built, laid with boards, stretch up to 100 meters with no nails and piers being used. Some of the Qiangs are excellent masons and are good at digging wells. During slack farming seasons they go to neighboring places to do chiseling and digging. Their skills are highly acclaimed.

Marriages, mainly monogamous, were arranged by parents in the past. Usually, the wives were several years older than their husbands. It was common for cousins to marry and for bridegrooms to live with their wives' families. And it still is not unusual for brides to live in their parents' houses within a year or so after marriage. In Qiang society, younger brothers could make their widowed sister-in-laws their wives and elder brothers could marry the widows of their younger brothers. Such habits have been gradually discarded since liberation.

Most Qiangs were believers of Animism, except for those who lived near Tibetan communities and were followers of Lamaism. The Qiangs worshipped white stones placed on roofs as the 'Heavenly God.'

The Qiang people have created a unique culture and arts and crafts. The clever and deft Qiang women can do embroidery and drawnwork extemporaneously without designs. The Qiangs are good singers and dancers. 'Wine song,' 'plate song,' 'mountain song' and 'leather drum' dances with accompaniment of gongs, tambourines, sonas and bamboo flutes are popular.