Chengdu,is the capital of Sichuan province,located in the southwest China,it well-known as "the capital of leisurely life",also the captical of Shu Kingdom in ancient time,which has a history over 2300 years.

Our city flower is hibiscus, the ginkgo tree is the city tree.Sichuan province also called the Tian Fu Zhi Guo,thanks to the contribution of Li bing and his son, the major conductors of the outstanding projuect - Dujiangyan Irrigation Sysstem. Tourists from domestic and abroad taking the Chengdu into their consideration almost be attracted by the leisurely life,spicy Sichuan cuisine and cute pandas.Actually, we could divided all the Chengdu city sites into four parts:the pandas,the folk streets,the historical sites and and the custom. 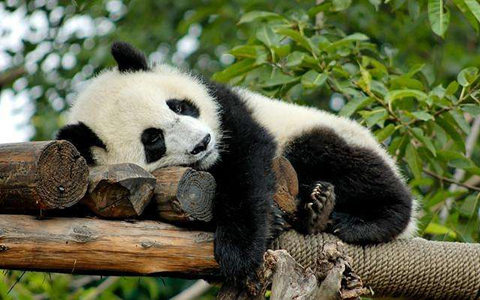 Panda, definitely the cutest anmial in the world,and they are only found in Sichuan, Shanxi and Gansu provinces. In total there are fewer than 1000, of which 80% are distributed within the territory of Sichuan province.Most of the panda habitats now has been listed as the nature reserves in order to protect this rare species. They are not only a Chinese national treasure but are also beloved by people worldwide. In that case, many visitors from domestic and abroad come to Chengdu, and their most main objectives will be to see the giant pandas for themselves. And the best choice is to visit the The Chend Panda Breeding Research Center.It s located only 10 KM from the downtown of Chengdu city, it imitates the pandas' actual habitat in order that they might have a the best possible environment for rearing and breeding.The Center cares also for other rare and endangered wild animals. So you could see over 20 species of rare animals like the lesser pandas, black-necked cranes and white storks at the same time.

Chengdu has a long history over 2000 years,which never changed the name and the location in its history.Till now ,there are also some sites about the famous people those connected with the ancient Cheng city. 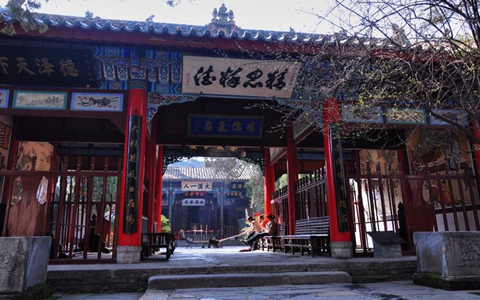 The Wuhou Temple in Chengdu's south suburb is the most famous and influential of the temples dedicated to Zhuge Liang who lived from 181 until 234 AD.

During the Three Kingdoms period of China from the year 220 until 280, China was divided into three empires that were warring to conquer each other: the Wu, Wei and Shu Kingdoms. The area around the ancient city of Chengdu was a part of the Kingdom of Shu. Liu Bei (161-223) was the Shu Kingdom's first emperor, and he needed Zhuge Liang to help him govern. The Shu Kingdom was finally defeated. But the stories between the emperor Liu Bei and the minister Zhuge Liang are still very famous.

Zhuge Liang is one of China's famous historic figures, and he was a renowned minister and military strategist for Emperor Liu Bei during the Three Kingdoms period in China. The temple is also dedicated to Emperor Liu Bei. It was built during the Qing dynasty in 1672. Because Zhuge Liang was granted the title of "Wuxiang Hou" (Marquis Wuxiang) in his lifetime, this temple is known as the Wuhou Memorial Temple. The temple is one of Chengdu's major attractions and contains numerous statues to Emperor Liu Bei, Zhuge Liang and other officials of the Shu Kingdom, and there are ancient inscriptions and tablets that are famous in China. In 759 ,Du Fu moved to Chengdu because of the Anshi Rebellion in the real history, then built a thatched hut which near the Flower Rinsing Creek with the help of his friend and lived there for four years. The 'thatched hut' period was the peak of Du Fu's creativity. He wrote two hundred and forty poems, among them: 'My Thatched Hut was torn apart by Autumn Wind' and 'The Prime Minister of Shu'.

Thatched Cottage of Du Fu is an idyllic 24-acre (97,000 Squre Meter) park and museum in honour of Du Fu at the western outskirts of Chengdu, adjacent to the Huanhua Xi, (Flower Rinsing Creek). In 1961, the Chinese government established Du Fu Cao Tang as a National Heritage site.Thatched Cottage of Du Fu is now a popular destination for Du Fu enthusiasts around the world to pay tribute to the great poet.

The small cottage of Du Fu is the typical stysle of Western Sichuan folk dwelling,and surrounded by big banyan tree ,stream ,medicinal garden and other plants.Actually ,according to the real history and poems of Du fu,the small cottage which he lived in Tang dynasty is more dilapidated than nowsdays.But we can image the poor life of Du fu in Tang dynasty by the visiting it.

Wenshu Monastery is the best-preserved Buddhist temple in Chengdu. It is the home of the Buddhist Association of Sichuan Province and Chengdu City.

Cultural relics are the highlights of Wenshu Monastery. Since the Tang and Song dynasties, over 500 pieces of painting and calligraphy by celebrities have been stored here. In the Sutra-Preservation Pavilion, many famous handwriting exhibits, paintings, and artwork are restored. These precious works of art were created by renowned Chinese painters and calligraphers, including Zhang Daqian, Zheng Banqiao, and Feng Zikai. Of all the precious relics, a piece of the broken skull of Xuan Zhang, a renowned monk of the Tang Dynasty, is the rarest. Another treasure is a delicate jade Buddha statue brought from Burma to China in 1922 by Xing Lin, a Buddhist monk who walked the whole distance. In addition, the monastery houses some 300 Buddha statues of various materials including iron, bronze, stone, wood, and jade, some gloriously painted.

★The Wide and Nrrrow Alleys

The Wide and Narrow Alleys(Kuanzhai Xiangzi) is the places full of historical remains where you can learn the local and real Chengdu life. In 1718 or 57th year in the reign of Kangxi in Qing Dynasty, Qing government commanded a thousand or so solders to stay in Chengdu and  in order to settle down the army and families, a “Mancheng” (block of Manchu) was constructed on the site of Shaocheng. And today's Wide and Narrow Alleys are two of the 42 soldiers' Hutongs, is exactly a part of the Mancheng. Known as the 'First Street of the Shu Kingdom', which can dating back to the Qin Dynasty (221BC-206BC),is one of the busiest of commercial boulevards of the Kingdom of Shu, during the Three Kingdoms Period (220-280). The geography of the area is relatively simple. Adjacent to Jinli Street is the ancient Temple of Marquis Wu,while the Jinjiang River lies to the north and the Rainbow Bridge to the east. By combining the spirits and styles of the Qin, Han, Ming and Qing Dynasties and the Three Kingdoms period, along with the folk customs of western Sichuan, Jinli has enriched the 'Sanguo' culture.Visitors from all over China and abroad gathered here in this ancient street to relax, take in the surroundings, and perhaps taste some of the local specialties.

Sichuan cuisine has enjoyed a worldwide reputation, and many travelers know Sichuan cuisine for its 'hot and spicy' flavors.Why the red pepper is so popular in Sichuan cuisine, because Sichuan has a humid climate, that encourages people to reduce internal dampness by eating the strongly spiced foods with red pepper.Besides, some famous dishes also creates a most sudden numbing effect on one's tongue,cause the pepper(also known as the Huajiao) is another important ingredient in Sichuan cooking.

Among the famous dishes, the hotpot is one of the most popular ones.The most representative and famous types of hotpots are Cattle-gut hotpot and Yuanyang hotpot.The traditional  hotpot's materials include cattle guts, cattle waists, beef and other vegetables, being a real self-help course.Another is the  famous snack dishes, they are called 'xiaochi' in Chinese. Chengdu snacks have a long history,featured in their unique flavors. They are cooked with various seasonings, have a particular style in color, smell, taste and shape. Each restaurant in Chengdu tries to offer a variety of traditional snack in an attempt to satisfy customers at home and abroad. 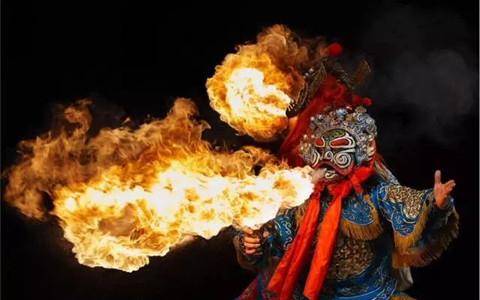 Sichuan opera has long history. it dates back to Three Kingdom period when a kind of opera form as 'Canjun opera'  came into being.While In Tang dynasty, a band of five appeared in Chengdu. Till Song dynasty, the opera developed into Tsa-chu. In Ming dynasty, artist of Sichuan opera performed the skill in Jinling (nowadys  Nanjing city). During the period of Yongzheng and Qianlong in Qing dynasty, as the 'Huabu' drama propered, Kunqu, Yiyang aria, Bangzi aria and Pihuang aria merged with local languages, folk customs, ditties, yang-kos and Dengdiaos in Sichuan as they moved into the place. At the end of Qing dynasty, Sichuan opera was played from temple fairs, halls and yard to urban theaters.

Chengdu is one of the cradles of Sichuan opera, which is the most representative opera in Sichuan area.In 1910s, Chengdu Sanqing Opera Association combined five melodic forms that include Gaoqiang, Kunqiang, Huqing voice, Tanxi and Dengdiao.

Being famous for its comedies in particular, Sichuan opera is delicate and vivid in acting, varied in performing, strongly local-flavored and humorous. The traditional performing formula is quite systematic in that it combines the stunts like face-changing, Tihuiyan, sword-hiding, fire-spitting and beard-changing with the plot and different characters, highlighting the romanticism of opera in a magical and exaggerated manner. Sichuan is regarded as one of the origin places of the tea's cultivation,production and drinking in China even in the world. Sichuan people especially love tea, love tea house.Tea house is one of the symbols of Chengdu city,even the Sichuan province.Teahouses all over the streets and lanes have become a big sight in chengdu.Cover-bowl tea ,"spokesperson" od the tea houses in Chengdu ,consists of  "lid,bowl and tray".Enjoy the cover-bowl tea in a teahouse, free chat with the local people ,you could feel the affinity of the local drinker and know moer things about the Chengdu cover-bowl tea.Obviously ,you could find a teahouse in the corner of the city,but the best place to enjoy the local tea with local drinkers is the People's Park.

In April 2017, the International Mind Sports Association announced that mahjong has officially become a worldwide intellectual sport. Sichuan is not the birth place of mahjong, but the mian entertainment of Sichuan peolpe is playing mahjong.Maybe it's the reason why Sichuan called the Tian Fu Zhi Guo and Cheng is konwn as 'the capital of leisurely city".Several years ago, the transportation of Sichuan province is not very convenient because of it's basin structure.And Sichuan people can only stay at home and then spend the leisurely time by playing mahjong.