I'm too excited because I have the chance to visit Chengdu,a modren and leisurely city which enjoys a high polularity of "a city that you will never want to leave so long as you come".Actually, I am not the traditional tourist who will explore the Chengdu city on their vacation.In other words,we are a group come from almost all over the world,France,Italy,New Zealand,Switzerland,Australian,Korea,Spain,Columbia,etc,and gathering in Chengdu city for a international competition-The Hurricane Criterium Global Final.On Oct.19,the competition was started in the Chengdu University.We have prepared months for it.And during the period, the famous Chinese star-Yangyou ning came and cheer for all the competitors with the peolpe who watch the competition live. Meanwhile,during the competition, people around  took so many pictures for us.In a word,we felt the pasasion of the Sichaun people. 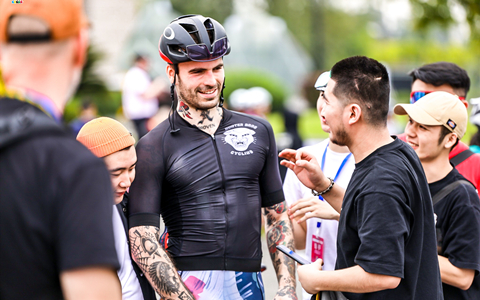 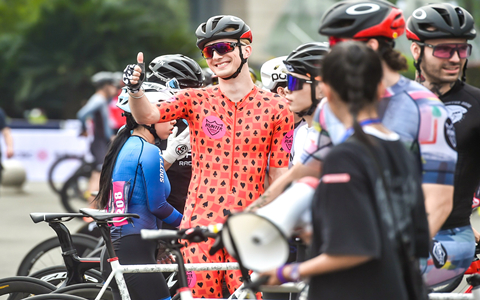 After the competition, we tried the spicy Sichuan cuisine,including the hotpot and some local snacks.And when we wandering around the city street,we saw plent of  souvenir shops sale the panda dolls contains the different sizes.It's so cute and we couldn't help but stop here to have a look and took many pictures for them.Along the street, also have so many travel agencies provide different Sichuan and China tours for tourists.Among all the tours, the Panda tour aroused our greatest interest.I heared that the Sichuan province is the hometown of giant panda,we all want to see the living panda face by face.So after we returned our hotel, we searched on the internet to find the travel agency which operate the tours for foreigners because some of us can't speak Chinese at all.Finally, we find the Travel Sichuan Guide ,and we spoke to them about our needs about the panda tour,we just want to see the giant panda in the Panda Base and then back to our hotel directly.They said it's definitely no problem to operate the panda tour within half a day and don't have to get up too early.Finally, we came to an agreement on everying about the tour,and will visit the Panda Base the next day.

The next day morning, around 8:30am, after having the breakfast ,the tour guide and driver from Travel Sichuan Guide warmly met us at the lobby of our hotel.The tour guide is a native of Chengdu city who worked as an English tour guide over 5 years.Along the tour, we passed the Gaoxin district and Chenghua district,and the tour guide told us many intresting things about Sichuan province,Chengdu city and giant panda.One thing is about the man.She said the men in Sichuan,they called them “paerduo" in native language,or the soft ear,says that they henpecked their wifies in literally,so they are obeys their wife's arrangement almost on everything.But it also proved that the Sichuan men loved their wifies on the  other side. 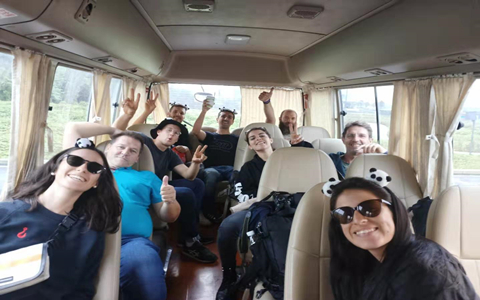 And the information about the food.She told us the Sichuan cuisine known as one of the eight traditional Chinese cuisines,famous for the spicy tasty,and so carefully balances color, smell, flavor, shape and nutrition that its dishes not only look pleasant and appealing, but also nutritious.The hotpot is the typical in the Sichuan cuisine,and Sichuan cuisine is able to produce 100 different flavored dishes.So we dicided to try more Sichuan dishes and Chengdu snacks after the tour.

Another thing is about the giant panda.The giant pandas are only found in Sichuan, Shanxi and Gansu provinces.It's the symbol of China,also absolutely the most cutest animals in the world. Adult giant panda usually 120-190 cm,with an average weight of 80-120 kg.They are white and black. The legs,shoulders,ears and oval patches around the eyes are black,and the rest of the coat is white. Which shocked me is that the baby cubs of panda is red with rarely white feather .And the baby panda weighs just 150 grams, only one thousandth of the mother panda's weight.Why is the giant panda a rare animal？In the wild after a gestation period of 125 to 150 days,if twins are born,mother pandas usually will ignore the weaker one in order to keep one survive.  The panda’s lifespan in the wild is about 18-20 years,and with an averages lifespan over 30 years once in captivity .Pandas feed mostly on bamboo,a tall woody plant full of fiber.But panda’s digestive system does not absorb the fiber,so it must eat a lot.Pandas also eat flowers,vines,tufted grasses,green corn,honey and rodents.Pandas are carnivores, occasionally turning to animals, such as bamboo rats, which feed on the roots of bamboo. 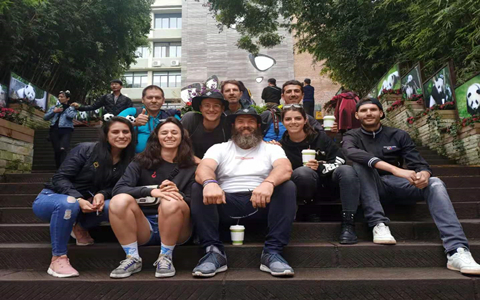 After 40 minutes' drive, we arrived at the Panda Base,and entered into it with the tour guide.There are still many tourists even it's Monday.Some are stand in line to catch the inside singtseeing bus,some are visiting the site by foot like us.We took many pictures with a big panda's statue with the help of the tour guide.And some of us bought the hair band decorated with panda doll. After 15-20miuntes' walking, we arrived at the first destination -the Sunshine Delivery House for Giant Panda. I saw the giant panda is sleeping on the tree and with its butt towards us ,it's so funny but also very cute.I loved that! Moving with the people in front of us, we saw the babies in the end.They're liying down the bed in the baby room,we can take pictures and observe them by the transparent glass.So lovely the babies!Then we visited the Moonlight Delivery House for Giant Panda.We saw more adult giant pandas than bofore,some are lie down and eating the bamboo; some are explore the top of the tree, some are sleeping leisurely.Only the one ,stand on its house and facing to us,so we took many pictures for this panda.It's definitely a lovely tour with pandas.

Around 12:00pm, we got on the original private tourism bus,and drive back to our hotel in Gaoxin district .And all of us are sharig the pictures we took in the Panda Base with each other.

The panda tour is one of the star tours of Travel Sichuan Guide,they also operate other destinations around the Chengdu within 1-2days like Leshan Buddha,Mt.Emei ,Dujiangyan Irrigation System ,the longer journey to Jiuzhaigou,Huanglong,Daocheng Yading and also the tour for Beijing,Shanghai ,Hangzhou ,Guilin and other popular cities in China.
The Panda Base, a native kind tour guide,an experienced driver, it's definitely a worth journey with Travel Sichuan Guide!