Chengdu, a modren city belongs to southwest China Sichuan province,has a long history over 2300 years, enjoys a high polularity of "a city that you will never want to leave so long as you come".

As a card for Chengdu with a long history, The Wide and Narrow Alleys are places full of historical remains where you can learn the local and real Chengdu life with family members and friends whether in daytime or at night. They lead you to a window through which you can have a better view of Chengdu and the world, the ancient and the fashion. 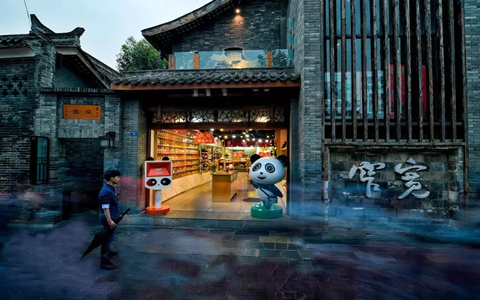 In 1718 or 57th year in the reign of Kangxi in Qing Dynasty, Qing government commanded a thousand or so solders to stay in Chengdu and built Man City (though Chengdu people tend to call it SHAO TOWN) on the basis of shabby SHAO TOWN after defeating the soongor invasion. The two alleys belonged to New SHAO TOWN where the soldiers and their families lived. The Wide Alley and the Narrow Alley are two of the 42 soldiers' Hutongs.

After the Qing Dynasty was overthrown by the 1911 Revolution, Shaocheng was gradually destroyed. Finally there were only three alleys remained and preserved. In the Mingguo era (the Republic of China), the three hutongs were renamed as the Wide Alley, the Narrow Alley and the Well Alley, thus the names today.

The Wide and Narrow Alleys was the living and playing ground for the members of “the Eight Banners” at the very beginning in the Qing Dynasty. Later on in the Mingguo era, a large number of all kinds of classes like merchants came here and brought with them a lot of new things like western food, coffee, phonograph and so on, and gradually a special culture that combines Chinese and Western elements was cultivated, also made the Wide and Narrow Alleys no longer for the "Eight Banners"only.

Today, the Wide and Narrow Alleys are places for experiencing the unique and local Chengdu. They centralize the traditional Chengdu life here and make them as the 'samples for Chengdu life'. 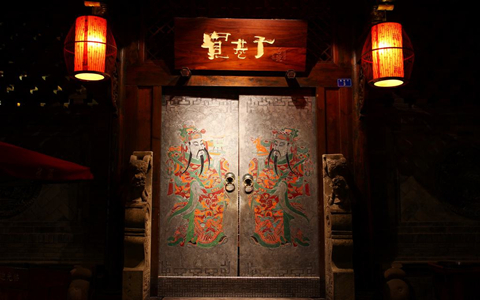 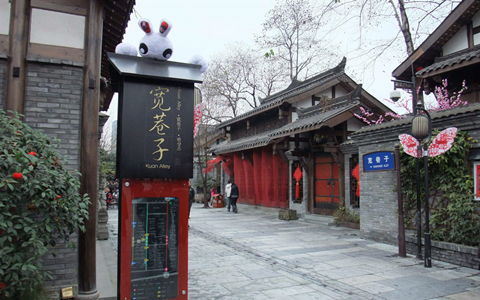 The Wide Alley was named as Xinren Hutong during the reign of Xuantong Emperor in Qing Dynasty. The soldiers setting up here were said to belong the Xianghongqi tribe (according to banner system of Manchu). We were told by a Manchu who knows Mongolian language that Hutong means pass way between Mongolian yurts. However, in the days of the republic of China, it changed into the Wide Alley due to the revolutionary trend of anti-imperialist and feudalism.

Nowadays, The Wide Alley is a mirror of the old life of Chengdu people, is area for leisure life and focuses on the tourism. There are hotels, confidential food restaurants, folk restaurants, leisure teahouses, chambers and SPA rest places.It will arouse our snug reminiscences of the old Chengdu when walking and having a cup of Chengdu tea and Sichuan dishes in the 'experience museum' enveloped with the local customs and precious folk culture of Chengdu. A north-south trending pass way leads to the Narrow Alley which was signed as Taiping Hutong in the map of Qing Dynasty. The soldiers brought hope to people struggling with war disasters, which can be referred in the name of Taiping Hutong. In Chinese, Taiping means peace which expressed the wish that Chengdu people were eager to live a peaceful life. As time changed, things changed. The Narroww Alley is focusing on business such as western food, coffee, chamber and theme culture. It grows into a fashion center and an international place, but that is not the whole story of The Narrow Alley. You can also get close with the local Chengdu life with the slow life-rhythm. Near the Narrow Alley is the Well Alley which got names as Ruyi Hutong and Mingen Hutong for the nearby buildings. After the 1911 revolutionary movement, it has been called the Well Alley until now.

After renovation,the Well Alley is famous for a 500-meter-long brick culture wall and a 500-meter -ong flok custom photo wall which were built on the other side of the street old street. It' s the vivid life scene of old Chengdu city.

Now, the Well Alley is for new life and especially for young people. It is a fashionable entertainment area with the bars, night inns and creative themes.

Join us ,explore the Wide and Narrow Alleys with Travel Sichuan Guide, imaging the old and quite life of it in Qing dynasty while experience the modern and leisurely life of three alleys today.