Top 13 Things To Do In Chengdu China

Are you planning a tour to Chengdu, China and are you wondering what are the must-dos-and-sees in town?  We've carefully selected  a list of the top 10  attractions and must-dos in Chengdu,  hopefully, it can be helpful in planning your trip to Chengdu.

Chengdu is  the capital city of Sichuan province, a large province with a polulation around 100 million and an area of 486 thousand square kms. With some nicknames such as "Panda's  Hometown", "Gourmet City" or "Braocade City", Chengdu has a history of 3,000 years with countless historic places. What's more interesting about the city is that the city proper has neve been moved since the city was set up here, it is the only city which never changed city location in China.

Locals in Chengdu prefer hot and spicy food, Sichuan Cuisine is one of the famous 4 China Cooking Styles. The twice cooked pork, fish-flavored pork shreds, Chili soup boiled pork or beef are some of the representatives of Sichuan cuisine. Besides, Hot-pot is another food which attracts visitors both Chinese and foreigners.

See the Top 14 Must-See-and-Dos in Chengdu below:

The Research Base of Giant Panda Breeding is located at the northern suburb of Chengdu , about 8 Kms away to downtown area. The panda base was built in 1980s, imitated the pandas' natural habitat. Now, the panda base have developed into a huge panda park open to public visitors. About 80 pandas live in the base, all of them were born by artificial insemmination. Large amount of scientific research and cooperation work is done here by the zooigists of China and other countries.

Jinsha Relics Museum is one of the highlights of  Chengdu Tour.  the Jinsha Site Musem is a place for visitors to closely observe the excavation of archeological spot and a perfect place to learn the glorious Chinese culture of the ancient Shu Kingdom. The Jinsha Relics Museum is  located at the western part of Chengdu, only 5 Kms away to the city center. 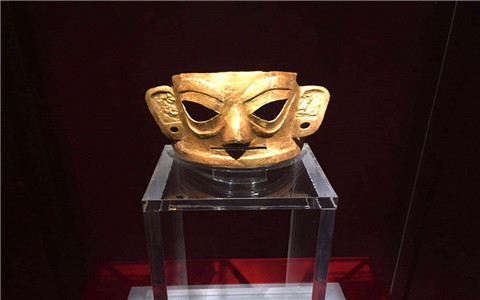 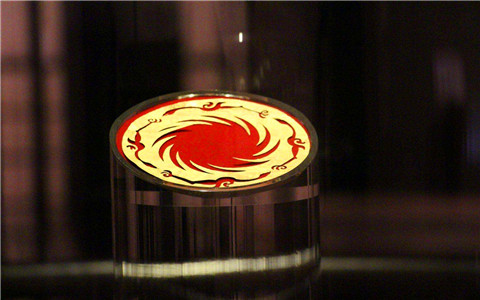 Qingcheng Mountain is also one of the birthplaces of Chinese local religion Taoism. With over 20 temples and religious sites related with Taoism, it shows a strong flavor of Taoist culture, all of the buildings were built at the right places under the Taoist philosphy "the Harmony between Human and Nature".

Dujiangyan Irrigation  Project was  built in 256 BC during the Warring States Period of China by the Kingdom of Qin. It is located in the Min River in Sichuan.

Dujiangyan Irrigation Project is still in use today to irrigate over 5,300 square kilometers of land in the region. The project consists of three important parts, namely Yuzui, Feishayan and Baopingkou scientifically designed to automatically control the water flow of the rivers from the mountains to the plains throughout the year.

With a history of more than 1,000 years, Wenshu Temple is the largest and the best-preserved Buddhist temple in Chengdu. It has been a popular destination for visitors and pilgrims alike for centuries.

There is a tallest iron pagoda in China near the entrance to the Wenshu Temple, the Peace Pagoda of a Thousand Buddhas.

The most outstanding objects in the Wenshu Temple are these over 300 statures of the Buddha, which are made by iron, wood, stone, and clay. The most distinguished one is a jade Buddha brought back from Burma by a Buddhist monk on foot in 1922.

Du Fu Thatched Cottage Muserm  was built at  the former residence house of Dufu, a well-known poet of Tang Dynasty,when he wandered to Chengdu in order to esacpe from the chaos at Changan (the capital of Tang Dynasty, nowaday's Xi'an city) caused by "Anshi Rebillion"  in the late Tang Dynastay. He lived here for 2 years and 9 months, but composed more than 200 poems. Later people respectfully called Dufu the 'Sage of Poems' . For his great contribution of Chinese poems and literature, the thatched cottage he once lived has become a holy shrine of China literature .

Du Fu Thatched Cottage Museum is actually something like a peaceful park  hiding in the noisy metroplis. It consists of six important parts: the Front Gate, the Lobby, the Hall of poem History, the Water Pavilion, the Gongbu Shrine and the Thatched Cottage. There are exhibits that provide details of Du Fu's life and work. In addition, statues, stone carvings, paintings, and calligraphies by famous writers of different dynasties are also on display. 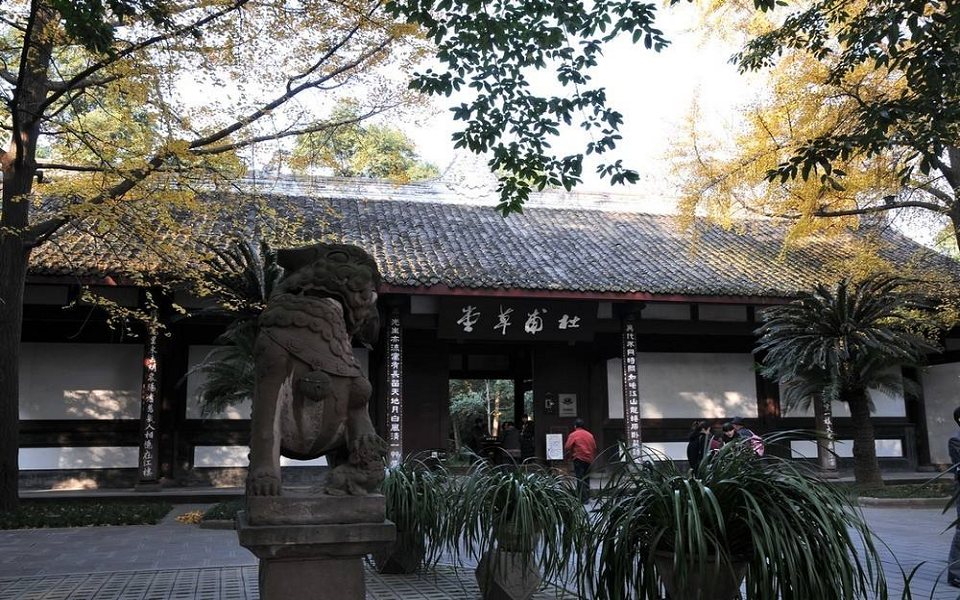 Kuan Zhai Xiang Zi is one of the three historical relic protection areas in Chengdu. This area is actually mainly composed of three lanes – Kuan Lane, Zhai Lane and Jing Xiang Zi as well as the old grid pattern streets and courtyards formed by the three parallel alleys.

The front part of the shrine is the hall to worship Liubei, the emperor of Shu Kingdom, and Liubei's tomb is also incorporated in the huge museum.

Jinli Old Street is  just next to  Wuhou Memorial Temple of Chengdu. As recode, the street was built originally as early as Shu Kingdom and is called “The First Street of the Shu Kingdom”.

For its unique architecture style, Jinlin old street was Listed in 'China's Top 10  Commercial Pedestrian streets'  in the year of 2005. Jinli Old Street combines the ambience of ancient and modern China.Walking on the black-stone paved  street, people have a strong feeling dating back to thousand year ago . The small shops with wooden steles, doors and the brick-walls are all good imitations of ancient China shops. 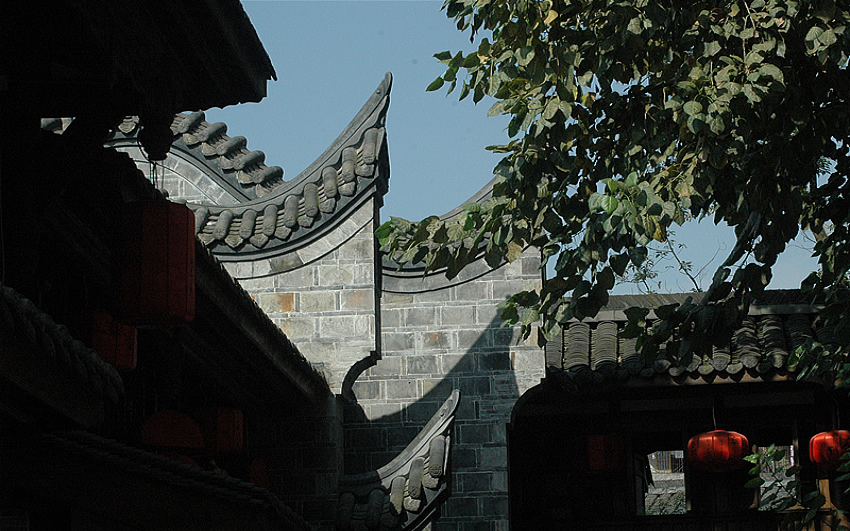 The Sanxingdui Museum is located in the northeast of the Sanxingdui remains, near the Duck River. It is a modern theme museum which is 40 kilometers to the north of Chengdu. The museum was opened to public in October 1997. Covering 200,000 square meters, the total investment has reached over 30 million yuan.The whole design of the museum is simple, but with a solemn style. The museum has become a place of cultural and tourist attractions enjoying prestige both at home and abroad and one of the three exquisite spots Sichuan has offered to the world tourism.

Hotpot is the most famous and favorite dish in Sichuan and Chongqing. The local people consider the hotpot a local specialty, which is noted for its peppery and hot taste, scalding yet fresh and tender. Nowadays, as a matter of fact, the hotpot is famous and popular all over the country. The typical hot pot is served with a pot full of butter and chili soup together with a lot of ingredients such as Chinese pepper, scallion, ginger, garlic etc. The soup is fresh red and very hot and spicy. Eating materials are rich from all kinds of meat to the organs of pigs, bulls, rabbits and ducks. For all the vistors, have a taste the authentic Sichuan Hot-Pot meal is an experience you can't miss.

Tea-houses are scattered here and there in Chengdu either indoors in the new buildings or outdoors in the parks or just outside a shops along the street. Like westerners' coffee drinking,  local Chengdu people are addictive of tea, espcially the jasmine Bowl-covered tea.The tea cup is composed of three parts: the cover, the cup and the tray.  People will drink tea to talk about business, to invite people for a party, to celebrate some festivals. For some senior citizens, they can just spend a whole day sitting in a tea house in the park. Ordering a glass of jasmine tea, they just stay there to talk with friends, or plan Majhong, or read newspapers, or nap in the bamboo chair. When the water was drunk over, it is free to refill the glass with boiled water. Besides of tea, the tea houses also serve lunches for the tea drinkers. So, this is another Must-Do for visitors to Chengdu.

Sichuan opera is a kind of local opera popular in southwest China. With a repertoire of thousands of plays, Sichuan opera is said to have '3000 Tang stories, 800 Song tales and endless Three Kingdom anecdotes'. Being famous for its comedies in particular, Sichuan opera is delicate and vivid in acting, varied in performing, strongly local-flavored and humorous. The traditional performing formula is quite systematic in that it combines the stunts like face-changing, Tihuiyan, sword-hiding, fire-spitting and beard-changing with the plot and different characters, highlighting the romanticism of opera in a magical and exaggerated manner. The face-changing show, for its unique performance style, and the quick changing of the musks, is called the Wonder of SIchuan opera.  The most sophisticated actor can change the musks about 12 times in just 20 seconds. This is a scret for the visitors to discover in Chengdu.