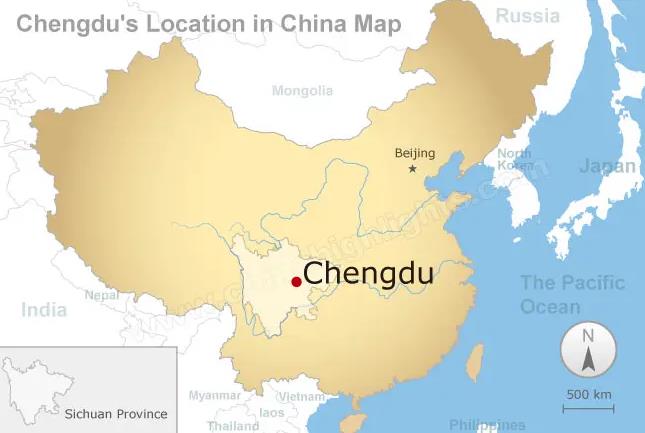 Chengdu is the capital of 'Heavenly State' (Tian Fu Zhi Guo), habitat of giant pandas and city of cotton-rose hibiscus. Chengdu is located in one of the country's richest agricultural plains, and it has an area of 12,300 square km.  Chengdu is 2,048 km from Beijing and slightly over 2 hours by plane.  Chengdu has direct domestic and international flights from elsewhere in China and some Countries. The population of Chengdu is about 10 million. This city is divided into eight districts, four outlying cities and eight counties. About 3.5 million people reside in the city center.

During the past 2,300 years, Chengdu never changed its location and its name despite many upheavals. It has always remained the capital of Sichuan. Fortunately the Dujiangyan Irrigation system brings the vast Chengdu plain under irrigation and has protected it against droughts and floods for over 2,300 years. Because of this Chengdu Plain has turned into the land of abundance with a mild climate and fertile soil.
While in modernized Chengdu, there are still many miles of bustling back streets to explore: free markets, flea markets, peddler markets, commercial districts, underground shopping malls. And what's more, the countless tiny restaurants specializing in Sichuan snacks, myriad teahouse scattered everywhere... you're looking at one of China's most intriguing cities.