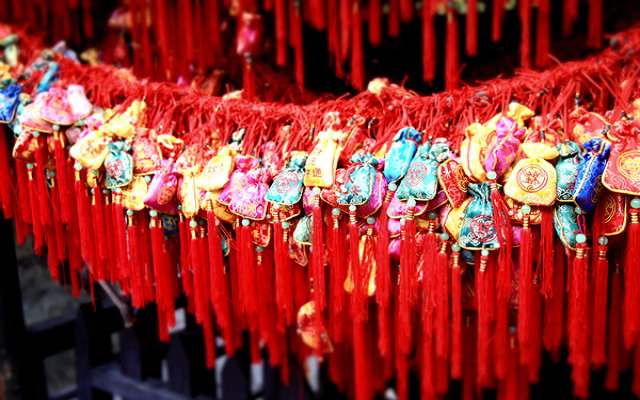 Dating back to the Qin Dynasty (221BC-206BC), Jinli Street in Chengdu, Sichuan Province, was in ancient times one of the busiest of commercial boulevards of the Kingdom of Shu, during the Three Kingdoms Period (220-280). It is thus known as the 'First Street of the Shu Kingdom'.

At the time of the Three Kingdoms period, the production of the famous Shu brocade (a rich silk fabric with raised patterns in gold and silver) was centralized at the southern bank of the Jinjiang River in Chengdu, adjacent to the historical Temple of Marquis Wu. The area was originally known as Jinguan or Jinli, and during the later Tang and Song Dynasties, Jinli became another name for the city of Chengdu.

The geography of the area is relatively simple. Adjacent to Jinli Street is the ancient Temple of Marquis Wu,while the Jinjiang River lies to the north and the Rainbow Bridge to the east. By combining the spirits and styles of the Qin, Han, Ming and Qing Dynasties and the Three Kingdoms period, along with the folk customs of western Sichuan, Jinli has enriched the 'Sanguo' culture.

Renovation of the street was completed at the end of 2004. Visitors from all over China and abroad gathered here in this ancient street to relax, take in the surroundings, and perhaps taste some of the local specialties. It is said that citizens of Chengdu are particularly fond of dining and socializing, and perhaps this is what helps to create the city's leisurely ambience.Chengdu has been newly designated as one of the ten most livable cities in China.