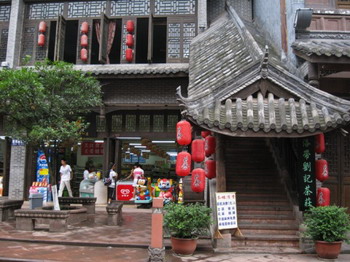 Luodai Ancient Town, located in eastern Chengdu, is the largest  Hakka community  in southwest China.  Hakka is one  ethnic groups in China.  Most of them reside in Guangdong(Canton), Jiangxi and Hubei provinces. There are 20,000 Hakka people in Luodai, comprising about 90% of the town's total population of 23,000.

Luodai Ancient Town is close to modern city of Chengdu, which makes it unique among all the Hakka communities in China. The Hakka residential areas in Fujian, Guangxi, Guangdong, Jiangxi and Taiwan are mostly far away from metropolises.

The history of Luodai Ancient Town can date back to Han Dynasty when it was called 'Wanjing Street'. Thousands of years' history and multicultural exchange have assimilated diverse culture, variious historical sites and Hakka architecture in this small town.

There is a interesting story related to the Name 'Luodai' of the town.  A belt of Emperor Liu Chan, the last emperor of Shu Kingdom in the Three Kingdoms period, had once fallen into a octagonal well here about 1,500 years ago. As 'fell' in mandarin is 'Luo', and  'belt'  is 'Dai', the place was thus given the name 'Luodai'.

The houses, courtyards and streets in Luodai are all  in the ancient style of Qing Dynasty (1644-1911) or the Republic period (1912-1949). The Guangdong Guildhall is the landmark of Luodai Ancient Town. Originally named Nanhua Palace, it is the masterpiece among Hakka architecture as well as the best preserved and the biggest guildhalls in 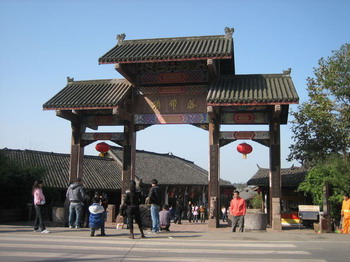 China. It was built during the reign of Emperor Qinglong in Qing Dynasty (1746) and consists of three halls, with a total are of 3044.75 square meters. It is the place where the Hakka people gather, meet relatives and friends, settle disputes and make sacrifices to ancestors and gods. Several other guildhalls, such as those of Huguang, Jiangxi and Chuanbei, also remain in good shape.

There are one 1,000-meter-long main street and seven alleys in the ancient town. The dwelling houses along the main street are all  enclosed courtyards with an open area in the middle and a main building decorated with carvings of turtle and flower. The roofs of the houses are all covered with cogon and small black tiles.

The annual Fire Dragon Festival is really grand in Luodai.  There is a great ceremony and many activities, including greeting the dragon, worshipping the ancestors, taking the dragon home and painting the dragon's eyes.