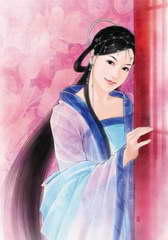 Qintai Street is a sightseeing street in Chengdu. The street was built recently imitated the traditional Chinese construction style, especially the styles of  Ming and Qing dynasty. Walking along the street, you can appreciate the old-styled buildings lined alongside the street.

This street became well-known for an ancient love story between Sima Xiangru and Zhuo Wenjun. The story happened in a small town near Chengdu during the Western Han Dynasty about 2,200 years ago. Zhuo Wenjun was a clever nice-looking girl from a rich family. Unfortunately she became a widow when she was quite young. One day, Sima Xiangru came by and got acquainted with Zhuo wenjun. Sima Xiangru was a well-learned scholar and good at writing essays which was popular in Western Han dynasty. He fell in love with this lady. At a dinner party at Zhuo`s home, Sima Xiangru played a stringed music instrument(Chinese zither). Intentionally, he used a piece of music to express to Zhuo his sincere love. Zhuo understood the music, and fell in love with him too. However, Zhou's parents didn't approve because Sima Xiangru was still a poor schloar in those days. So the lovers ran away secretly. They arrived at the western suburb of Chengdu where they managed a pub to make a living. It is said that Sima Xiangru sold liquor while Zhuo Wenjun served the drinkers as waitress.
Before long, Sima Xiangru went to Chang'an, the capital of the Han Empire 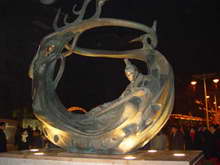 for its job, left Zhuo wenjun alone in Chengdu. For the truly love rooted at the bottom of her heart, Wenjun kept waiting for him in Chengdu. Her waiting lasted five years but unfortunately Sima Xiangru didn't come back for their family reunion. One day, a letter came to Zhuo from her husband. She read the letter and realized that Sima Xiangru was intoxicated by the lavish life in Chang'an and intended to divorce. Zhuo was completely depressed and wrote back to Sima Xiangru. In her letter she composed four pieces of poetry describing their past love and her longing for reunion. After reading her letter, Sima Xiangru felt ashamed. Moreover, he himself drove a four-horse carriage back to Chengdu where he picked up his wife and took her away to Chang'an for their final reunion.