The Tomb of Wang Jian is located in the western suburb of Chengdu City in Sichuan Province. 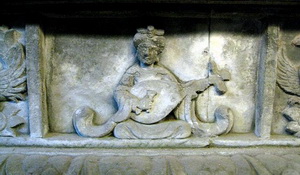 The tomb belonged to Wang Jian, and was called the Yongling Mausoleum. Wang Jian was born in Wuyang County in Henan Province. In early years, he was the Faithful Army general, and in 903 Emperor Zhaozong of the Tang Dynasty granted him the title of King Shu. In 907, the Tang Dynasty (618-907) was destroyed, and Wang Jian ascent to the throne and set up an independent regime, which was called  Former Shu in the Chinese history.

The site of Wang Jian's tomb had been misrepresented as the musical instrument platform of the famous litterateur Sima Xiangru in the Western Han Dynasty (206BC-8AD). During the excavation of bomb shelters on the site in 1942, the Yongling Mausoleum was found, but it had already been robbed empty. Wang Jian's tomb was first constructed in the 1styear (918) of the Guangtian reign, covering an area of 7mu(1 mu = 1/15 ha.), with the earthen heap of 45 meters high. The tomb was divided into the front, middle and back chambers, with the total length of 23.6 meters.

The whole grave construction is grand and luxury. The coffin was placed in the middle 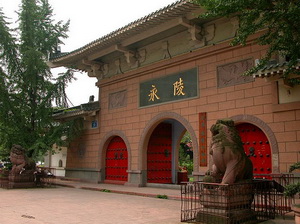 chamber, and the stone bed was placed in the back chamber with the stone statue of Wang Jian on the bed. The unearthed important cultural relics include mourning brochures, jade belt, jade ring, silver bowls, silver pigs, silver dish, copper and iron wares, pottery and so on. Three groups of refined stone carvings were unearthed from the tomb: the first group in the middle chamber depicts 12 Hercules uplifting and supporting coffin, the second group is 24 pictures about music performances, the third group includes the basso-relievos in the front side of the imperial bed, and the sitting statue of Wang Jian. The three groups of stone carvings are extremely precious materials for the research into the music, dancing and carving art in ancient China.