Wangjiang Tower Park is located on the southbank of the Jinjiang River in Chengdu. It is one of the three famous cultural relics in Chengdu along with the Wuhou Memorial 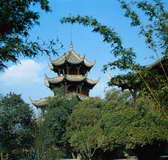 Temple and the Thatched Cottage of Du Fu. Wangjiang Tower is dedicated to Xue Tao, a poetess in the Tang Dynasty. A Woman in the past lacked social status and therefore it is all the more fascinating.

Xue Tao after whom the park is named was born in a turbulent society and this was the reason why her father named her 'Tao'. She led a hard life and eventually after her father's death she became a singer. Xue Tao was versatile and beautiful and according to history, she has written 500 peoms which have been greatly admired by her contemporaries.

Once you enter the Wangjiang Tower Park your attention will be diverted to the bamboos. Xue Tao loved bamboos and thus more than 150 varieties of bamboo from home and abroad are grown here in her honour. The Tower Park is the finest and elegant garden of bamboo in Chengdu.

The Wangjiang Tower in Chengdu has become an important landmark in the city. 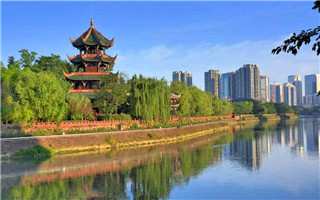 According to legend, the sponsor wanted the building to conform according to fengshui basically to enhance literate luck. However, it was only after the tower was completed that the sponsor revealed in two poems that his true motivation was to honor Xue Mao. The tower stands at a height of 39 meters and is the greatest building in the park. The park is also referred to as Chongli (which means grand and beautiful in Chinese). Out of the four stories in the tower, the upper two are octagonal and the lower two are square. Each eave layer is beautifully decorated with sculptures.

Visitors at the Wangjiang Tower in Chengdu can enjoy tea made from Xue Tao Well water, read poems and couplets left by celebrities, and become intoxicated by the ethereal surrounding. An admission fee of CNY 20 is charged per person. The tower is open from 8AM till 5PM everyday.