The giant pandas are only found in Sichuan, Shanxi and Gansu provinces. In total there are fewer than 1000, of which 80% are distributed within the territory of Sichuan province. Most of the panda habitats now has been listed as the nature reserves in order to protect this rare species. They are not only a Chinese national treasure but are also beloved by people worldwide.

Head to the “Real Hometown of Giant Pandas” - Sichuan Province in China, you could see the cute pandas in the follow 4 habitats. 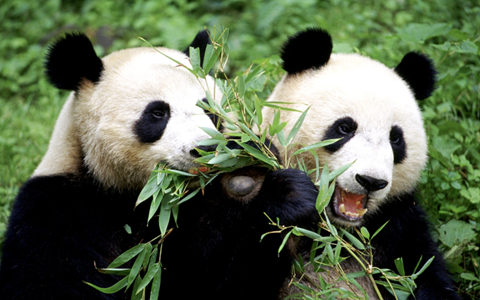 First is Chengdu Giant Panda Breeding and Research Center, it's located only 10 KM from the downtown of Chengdu city, it imitates the pandas' actual habitat in order that they might have a the best possible environment for rearing and breeding. The Center cares also for other rare and endangered wild animals. Giant pandas, lesser pandas, black-necked cranes, white storks as well as over 20 species of rare animals are fed and bred there throughout the year. Verdant bamboo, bright flowers, fresh air, a natural hill scene and a beautiful artificial view are merged ingeniously at the base.

Dujiangyan Panda Base has seven functional zones, including rescue zone, isolation zone, healing zone, educational zone, scenic zone, etc. Among three of them - the healing, educational and scenic zones are opened to public. Panpan Garden, Shuangnan Garden, Diequan Garden and Linze Garden together form the panda’s garden where you can see the adorable white and black giant pandas as well as red pandas living and having fun there and also appreciate the natural sightseeing in the bamboo forest.

Third is Wolong Shenshuping Pnada Reserve. Wolong Shenshuping Panda Reserve, belonging to the Wolong National Nature Reserve,which reputed as the “Panda Kingdom” and “Gene Pool of Precious Flora and Fauna”, is home to about 60 percent of the world’s total panda population. Standing about 1700 meters above the sea, Wolong Giant Panda Reserve is the world’s largest breeding center for the giant pandas with more than 30 captive pandas. 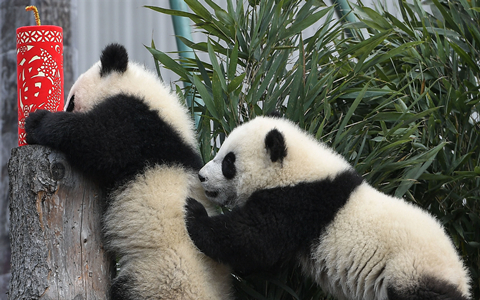 Since the severe big earthquake occurred in Wenchuan in 2008, the original Hetaoping Panda Base (核桃坪熊猫基地) was destroyed. To protect the precious giant pandas, government of Hong Kong Special Administrative Region endowed to build the new panda base at Gengda Township (耿达镇) and called it Shenshuping Panda Base under the China Conservation and Research Center for the Giant Panda (CCRCGP) (中国大熊猫保护研究中心耿达神树坪基地). With the total area covering 150 hectares, Shenshuping Panda Base, is mainly divided into three areas for the different functions, namely the visiting area for captive panda, wild training area and reintroduction area. With rich types of facilities like 59 panda enclosures, tourist center, scientific research center, science education center, veterinary hospital, etc. Wolong Shenshuping Panda Reserve is at present the largest, most dynamic and self-sustaining base for giant pandas around the whole globe.

Yaan Bifengxia Panda Base (雅安碧峰峡大熊猫基地), short for Ya’an Bi Feng Xia Base of CCRCGP (China Conservation and Research Center for the Giant Panda), is also known as Bifengxia Panda Reserve or Bifengxia Panda Center. In 1869, the world first giant panda was discovered by the French biologist Armand David in Dengchi Ditch, Baoxing County, Yaan City, after it was transferred to the Paris Museum as a specimen, the whole world was in sensation. Through the great effort of the scientific researchers, Yaan has offered 136 giant pandas to the state of China, among which 18 were given as presents to the US, the UK, Australia, Japan, Germany, etc. and many giant pandas born in other counties came back to Yaan Bifengxia Panda Base to live in the hometown of their mother and father, like Taishan, Fulong, etc.

For the safety and development of the captive population of giant pandas, China’s State Forestry Bureau planned and built the panda center in Bifengxia Valley in Yaan on December 28th in 2003. Being the “paradise” for about over 40 giant pandas of different ages, Bifengxia Center performs extraordinarily for the breeding, rescue, research, scientific education of giant pandas to save this rare and endangered animal species,and is reputed as the “World Natural Heritage - Giant Panda’s Habitat in Sichuan” together with Dujiangyan Panda Park and Wolong Shenshuping Panda Base.

What’s really heartening is that you can not only watch the female pandas nursing their pinky cute panda cubs in the nursery rooms, but see the infantile giant pandas enjoying milk in the pot as well during July to October.

For the absolutely panda fans, to be a panda keeper to have a close look at pandas may be the most memorable and forgetable thing in their lifetimes, meanwhile learn some rescue skills and scientific knowledge about pandas. 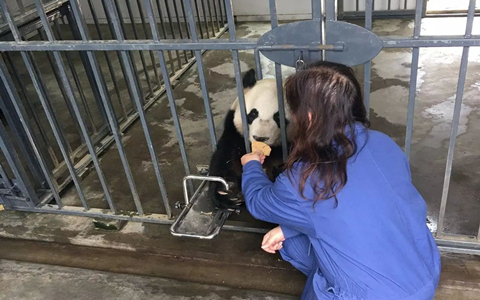 Search for where can do panda volunteer program?  Absolutely in Sichuan province,China, and volunteers can choose among the three natural panda bases -  Dujiangyan Panda Base, Wolong Shenshuping Pnada Reserve and Yaan Bifengxia Panda Base ,where you can take care of the endangered giant pandas and have conservation with them.

During the classic panda volunteer program, you would expercience the preparation and jobs that the real panda keepers do everyday for pandas.You would clean up bamboos, pick up droppings, wash the enclosures, observe and understand the panda's status and living conditions. etc,it will last about 2 hours.And you will explore the panda rescue exhibition hall to know aobut stories related with panda rescues,it lasts about 30 minutes.After that, it's the love feeding time,yopu could personally deliver to the pandas, contains their delicious 'Cake' and fruits, understand panda's feeding habits,and it will last 30 minutes. The food for the pandas also make by yourselves,it means you will experience the fun of making the 'Panda's Cake'.

Later,you will spend 45 mountes to watch a documentary that shows scientific facts about pandas.To understand how humans portcet them,and how we may live in harmony with them.The experienced panda experts will  share their scientific knowledge about pandas with us,it will last around 45 miuntes.

Finally,you can get your panda keeper certificate issued after finish all the activities above successfully in the panda base.