Best Time: March to May, September to November

People always say: "If you weren't on Ciqikou, you weren't in Chongqing". Ciqikou Ancient Town is a great place to stimulate the tastebuds and find unique souvenirs (wooden knickknacks, porcelain, clothes, foods to bring home, etc.). The area is also very suitable for picture taking and enjoying traditional architecture and street performers.

Located 14km west of Chongqing Chaotianmen Peir, with an area of 1.5 sq km, Ciqikou Ancient Town is reputed as "Little Chongqing" among tourists. Surrounded by three mountains and ran through by one river and two streams, Ciqikou has the great location to be a transport hub. In fact, it was a famous business port in the ancient time. At present, it's a great place to relax for the locals and tourists.

With a long history, Ciqikou Ancient Town was first built from 998 to 1003 and named as  Baiyachang. At the beginning of Qing Dynasty (1636 ~ 1912), Baiyachang was famous for producing and selling porcelain (there are over 70 porcelain stores at the peak time and most merchants from other places were coming for the porcelains here), and porcelain is pronounced as "ciqi" in Chinese, so Baiyachang was called as Ciqikou since then.

Ciqikou Ancient Town has 12 streets in total, and most of the architectures on the streets were built in Ming or Qing architectural style, and the roads on the streets are all paved with stone plates. Delicate specialty stores, featured snack stores and old style teahouses can be seen all over the town. Take your time to taste the local flavors, or just order a cup of tea and at the same time, watch the folk performances, like Sichuan Opera or Sichuan Qingyin, let Ciqikou take you back to the old time of Chongqing.

The architectures on the town are all featured in the architectural style of East Sichuan folk house. The basic structures of most houses were built with bamboo and wood. White painted wall with grey tile roof are the basic features. Besides, the wooden pillars in the room will be carved with dragon or phoenix images. Normally, the living house is located on the back of the shops, and the back houses are normally quadrangle dwellings, which were lived by rich merchants.

Walking around Ciqikou, if you find any architecture ruin and ask the locals about it, there is a great chance you'll get an answer like this: "it was a temple in the past". An old saying once described Ciqikou is a place with "nine Taoism temples and eighteen Buddhism temples". In the past, all kinds of ceremonies will be held in the temples once there were important occasions, like all kinds of festivals. 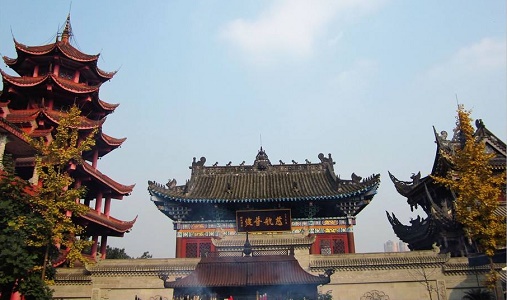 One of the unique features in Ciqikou Ancient Town is the teahouse. In the past, Ciqikou was full of teahouses. When Chongqing was still the deputy capital of China Nationalist Government, there were over 100 teahouses in Ciqikou. Sailors, Paoge (a member of Society of Brothers, which was a reactionary gang in southwest China before liberation), and all kinds of people just loved to come here. Teahouse was not only a place to drink tea, but also a place to entertainment, because most teahouses will provide folk art performances to public, like Sichuan Opera and storytelling performances.

At present, teahouse is still one famous feature in Ciqikou. There are 13 teahouses in the hundred-meter old street. Among all the teahouses, the most famous one is Shuchang Teahouse, which is still open and prosperous today. Shuchang Teahouse is also called as Artist Teahouse, and it's a place to appreciate the folk arts. It has various opera performances, like Seated Singing in Sichuan Opera, Sichuan Qingyin (singing with pipa), and storytelling, etc. People come to the teahouse in an endless stream, and there are almost no spare seats in the teahouse when there is an art performance. 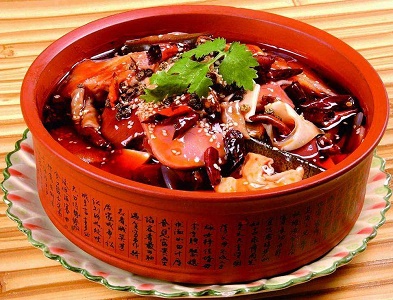 Tourists can taste many delicious local foods at Ciqikou Ancient Town. The most well-known foods are the "Three Treasures in Ciqikou". They are Eel with Duck Blood Curd, Qianzhangpi (fried sliced bean curd), and Salt Peanuts. Besides the three treasures, there are also other delicious featured local foods. Chen Fried Dough Twist is popular for its crispy flavor; glutinous rice cake is favored by children and seniors for its sweet and soft flavor. Tourists can also taste Chongqing cuisine in Ciqikou. Chongqing cuisine is reputed by its pungent and spicy flavor. Chongqing hot pot, poached fish in chili oil, barbecued fish and steamed chicken with chili sauce are all popular dishes.

By Flight: the direct distance between Chongqing Jiangbei International Airport and Ciqikou is about 24km and the drive distance is about 33km. From the airport, tourists can take taxi to get there, and it will take about 50 minutes and the taxi fare is about ¥80. If you take public transportation vehicle, you can take the rail transit line 3 first, and then transfer to line 1 and get off at Ciqikou Stop, and this will take about 1.5 hours.

Ciqikou Ancient Town is featured in subtropical humid monsoon climate, with an annual average temperature of 18℃. January is the coldest time and July to August is the hottest time, while the highest temperature can reach to 43.8℃. The most comfortable seasons are spring and autumn, and the most beautiful time in a day is morning and dusk. Chongqing is also called as "stove", its summer is very hot, and the outdoor temperature in summer can higher than 40℃. While the winter, there is always heavy fog, and it's not a good time to travel.

Notice: If possible, please visit it in weekdays,becuuse it's really crowded and you can't enjoy yourself from such noisy environment on weekends. If you only have weekends to use, then arrive at the town before 10:00 am, and tourists at this time are less than other time.

Ciqikou Ancient Town requires no entrance ticket from tourists; however, Baolun Temple in the town will need ¥5/person for entrance ticket, and this fee also includes three incenses.

There is no public toilet in Ciqikou Ancient Town, and you can use the toilets at the locals’ home. Well, it will charge ¥1 or ¥2 depending on the actual situation.

Most tourists will not stay overnight in Ciqikou for it will only need about 3 hours to visit it. However, if you plan to experience the ancient town with a slower pace, then you can accommodate in the youth hostels in the ancient town. The hostels in the town are decorated with an antique and unique style, with full facility and, very comfortable and cozy.