Best Time: All year round 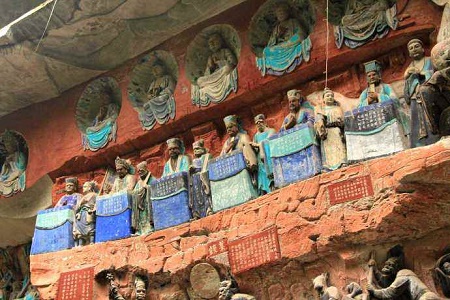 Listed as World Heritage Site by UNESCO in 1999, Dazu Rock Carvings enjoys comparable reputation with the top four grottoes in China - Mogao Grottoes, Yungang Grottoes, Longmen Grottoes and Maijishan Grottoes. Dazu Rock Carvings refers to all the rock carvings in Dazu District, and it has over 50,000 Buddha statues here,all of which are of the highest artistic attainment and demonstrate the most exquisite skills.

Baodingshan is a mountain located at the northeast of the center of Dazu District, about 15km from Longgang Town, with an altitude of 527.8m. Baodingshan Rock Carvings was designed by Zhao Zhifeng, and he organized the construction of the carvings. The project started from 1174 and ended at 1252. In a word, Baodingshan is a large-scale ashram of Tibetan Buddhism, where holds nearly ten thousands of Buddha statues. The rock carvings in Baodingshan include Giant Buddha Bay (which is centered on Shengshou Temple, a magnificent temple built along the mountain) and Lesser Buddha Bay. Nearly ten thousands of Buddha statues carved on a 500m long cliff, and this long picture tells almost all stories recorded by the Buddhist scriptures. The most amazing part is the way it tells the story. Baodingshan Rock Carvings describes the Buddhism stories in a more local and secularization way, which makes it more acceptable by visitors with different backgrounds.

Baodingshan Rock Carvings represents the highest sculpture art of China, and among all the sculptures, the Thousand-Hand Kwan-yin is called the national treasure of national treasures. It actually has 830 hands in total, and all of them are situated in a 7.7m high and 12.5m wide grotto. This statue combines sculpture, color paint and gild art into together, and it's just like the peacock spreads its tail, very stunning. 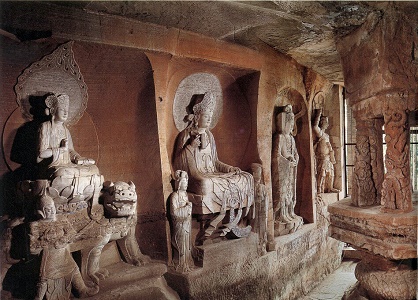 1.5km north to Longgang Town of Dazu, with an altitude of 545.5m, Beishan is also called Longgang Mountain in the past. Carved between 892 and 1162, Beishan Rock Carvings was carved in a 300m long cliff, with a height of 7 to 10 meters. The grottoes are very dense, just like a hive. The statues here are distinct from each other; they are all well-proportioned, with an elegant posture. The rock carvings are numbered and divided into two sections: No.1 ~ No.100 are in south section, while No.101 ~ No. 290 are in north section. There are over 5,000 statues and all of them were delicate carved with high sculpture skills. The majority of them are preserved intact and well. Among all the carvings, No.136 grotto represents the highest rock carving skill in Song Dynasty, and this Tibetan grotto is the highlight of Beishan Rock Carvings. Baodingshan Rock Carvings and Beishan Rock Carvings are the major attractions among Dazu Rock Carvings. 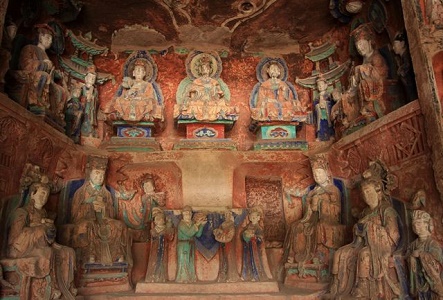 Located at 2km south of Longgang Town, with an altitude of 514m, Nanshan was called Guanghua Mountain in ancient time. With serene natural scenery, Nanshan was considered as the top 10 attractions in Dazu since the ancient time. The grottoes in Nanshan were carved between 1131 ~ 1162 on a 86m long cliff, with a height between 3.5m to 10.2m. Unlike other place, Nanshan Rock Carvings was themed on Taoism. There are 15 grottos in total, with 421 statues, and Sanqing Ancient Grotto is the representative work of Nanshan Rock Carvings. The carvings in Nanshan have vividly reflected belief changing process in 12th century.

Shizhuanshan Rock Carvings is located at Fohui Village in Sanqu Town, which is 20km from Dazu District. It was carved from 1082 to 1090 on a 130m long cliff,with a height between  3m to 8m . It's the earliest rock carving district which combines Confucianism, Buddhism and Taoism into together. There are ten grottes in Shizhuanshan, and the most famous one is No.6 grotto, which carved Confucius and the best 10 disciples of him, which is really rare in rock carvings in China. 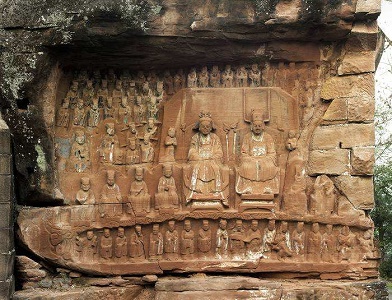 Located at Xinsheng Village of Shima Town, 20km east of Longgang Town, with an altitude of 374 meters, Shimenshan Rock Carvings was carved from 1094 to 1151. The whole carvings were carved on a 71.8m long cliff, with a height of 3.4m to 5m. Shimenshan Rock Carvings are mainly about the stories of the characters in Buddhism and Taoism, and it's the largest one which combines Buddhism and Taoism into one in Dazu Rock Carvings. The Taoism carvings in Shimenshan is the most artistic part; with life-like expression and dignified temperament, it fully shows the high skill of Chinese rock-carving. There are 16 grottoes in total, with 12 of them have figure statues in them. No.2 grotto, No.10 grotto and No.12 grotto are all very delicate and beautiful. 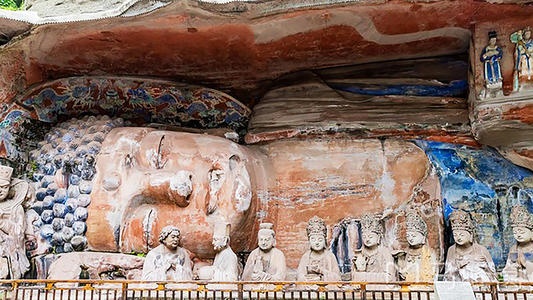 • Baodingsan Rock Carvings is the essence among Dazu Rock Carvings, and the transportation to here is very convenient. However, it's the farthest one to Dazu.

• The scenic area is not large, yet it's crowded with tourists, and the most famous Thousand-Hand Kwan-yin was already repaired and is now open to the public.

• From the entrance to the attractions, there is a half hour walk. For those want to save some energy, you can take the battery car at the entrance, and the ticket is ¥20/person.

• Beishan Rock Carvings is very close to Dazu, and after finishing Baodingshan tour, you can take bus back to Dazu, then take a taxi to Beishan.

• Beishan Rock Carvings is suffered from weathering; however, it's very delicate and beautiful, and the tourists here is far less than Baodingshan.

• After finishing the tour in Beishan, it's hard to find a cab in the mountain, so tourists need to walk for a short distance to the mountain foot, and you can appreciate the mountainous scenery of Dazu during this time.