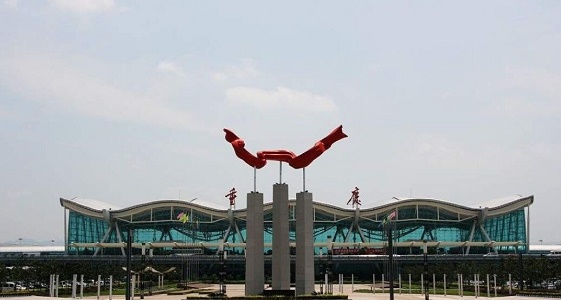 It is located 20 kilometers away to the northeast of downtown area. At present, over 70 air routes are in operation in Jiangbei Airport, connecting Chongqing with 60 domestic and international cities. You can easily take a flight to Chongqing from Beijing, Xian, Shanghai, Guilin, Hangzhou, Shenzhen, Jiuzhaigou, Hong Kong and Taiwan etc. And also take the direct international airplanes to South Korea, Japan, and Thailand.

Wanzhou Wuqiao Airport, formerly known as Wanxian Airport, is about 15 km from the Wanzhou District Downtown. The airport is busy with planes coming and going from Wanzhou to many biggest cities in China, such as Beijing, Shanghai, Guangzhou, Shenzhen, Kunming, Nanjing, Xiamen ,Hefei and Xian. 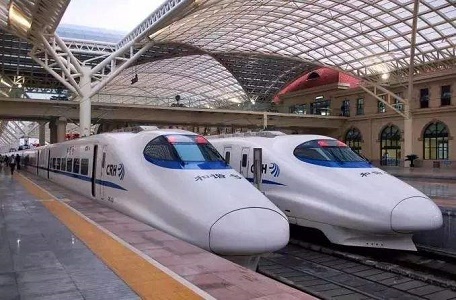 Chongqing Railway Station situated at Ciayuanba area in Yuzhong District in Chongqing ,is also called Caiyuanba Railway Station. This station at present is mainly used for normal K trains and T trains from the nearby cities, regions and other Chinese cities, such as Beijing, Guangzhou, Kunming, Guiyang, Shenzhen, Xining, Urumqi, Harbin, Nanning, and so on.

Chongqingxi Railway Station is the largest transport in western China.It's a comprehensive transport hub which is mainly composed of railway ,coach bus ,light rail and etc.There are 31 routes are in operation in this railway station,mainly for Chengdu,Lanzhou,Guizhou,and HUbei.It's 12km far fromChongqing Railway Station and 17km from Chomngqing North Railway Station.You can choose common bus,taxi and light rail to the downtown easily.

Because of the its ideal location on the Yangtze River, ships have easy access to the city. At present, passenger ships travel once per day to Yichang and six pairs of speedboats travel between Wanzhou District of Chongqing and Yichang. The ship takes approximately 40 hours and the speedboat takes around 5.5 hours. Furthermore, this city also serves as the starting point of several luxury Yangtze River Cruises,including Victoria Cruises, Century Cruises, President Cruises, Yangtze Explorer, Changjiang Cruises and 3-day Cruises,travelers can choose one of the cruises to explore the splendid river and the grand Three Gorges Dam

Chaotianmen, very close to the downtown of Chongqing, is the only port to get aboard in the "mountain city".And there are totally 13 docks.

More than 500 city bus lines serve the city. Most of them are self-service buses, charging CNY2 per person, while some only charge CNY1. Buses with conductors charge various between CNY1 and CNY10 depending on the distance travelled.

The taxis in Chongqing are yellow. Passengers can take taxis to almost everywhere and even to go to the suburban areas.Normally the base price is 10Yuan for the beginning 3 kilometers (about 2 miles) and CNY1.8 for each additional kilometer. The rate from 22:00 to 06:00 is slightly higher about 11yuan for the beginning 3km. Usually, a short journey within 10 kilometers (about 6.miles) costs no more than 30 Yuan. The peak time for taxis is from 07:00 to 09:30, 17:00 to 19:00 and 15:00 to 16:00, during which travelers are advised to book one in advance. 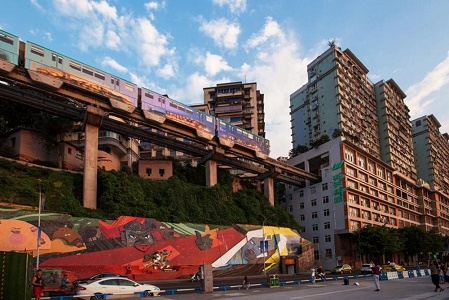 Six Chongqing subway lines are in operation connecting the city's nine districts together. Travelers are able to reach Jiangbei International Airport, North Railway Station, Chongqing Railway Station, Chaotianmen Dock and most of the Long-distance Bus Stations by subway. The ticket fare is charged on the distance travelled. In addition to these lines, there are another 2 lines under construction, Line 4 and Circle Line.

Lines to be Opened:

The subway in mountain city is an attraction for tourists from home and abroad.The map of it may be a little complicated for the peopele from the plain and circle city like Chengdu,but take the light rail to find the beautiful of this city will be an unforgettable exceperience in your lifetime.Look out the window,you could see the Yangtze River and Jialing River,also the scenery along the road。  Line 3 is highly recommend to enioy the night view ofthe city and Line 2 has a best place-a platfom to admire the light raily through a building.

Besides the conventional vehicles, Yangtze River Cable Car and escalators are another two distinctive vehicles in the city. The cable car is no longer used as a transportation vehicle, but for sightseeing instead. The Lianglukou Huangguan Escalator, linking Lianglukou and Chongqing Railway Station, is the other distinctive vehicle.

The most convenient way is to book a local transfer service with us while you booking your ship. Our local guide and drivers will pick you up in the airport or railway station according to your schedule, and send you to the right dock for your cruise ship directly, without time wasting of finding the road or finding a taxi.