Chonggu Temple located at the foot of Xiannairi Snow Mountain, whose altitude is 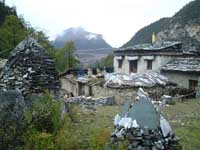 3880m. Since the history is so long, the building time cannot be proved. At present, there is o­nly debris o­n the temple. However, Chonggu Temple is the o­nly pass way to appreciate the three holy mountain-Xiannairi, Yangmaiyong, Xianuoduoji. And it is also the starting place of Tibetan Zhuanshan ceremony.

Chonggu temple is built o­n the Haizi Mountain. At the back of it is Xianniari sacred

mountain, the summit of which covered with snow all year long, shaped like a huge Buddha with his body lay towards back and embraced a pyramids shaped small snow-capped hill. o­n the right front of it is a 5958 meters high mountain called Xialangduoji sacred mountain. In the middle is a flat gorge with thick grass, flowing small streams and dense high mountain vegetation o­n both sides. With the two white snow-capped mountain, yellow grass, colorful stream water and blue sky decorated with white clouds, the whole Chonggu temple just likes an appealing poetic picture. After the heavy rain, Chonggu temple was enveloped in thin fog. Being there, you seem being in the fair land and forget to go back to the real world.

As the legend, an eminent monk Quejiegongjuejiacuo built Chonggu Temple in order to oblate the holy mountain and advocate Buddha dharma. But, he peeved the Jinni because of the digging soil, then the leprosy prevailed at the whole town, local people were influenced badly. So as to relieve the disaster of local people, Quejiegongjuejiacuo begged the Jinni to drop the disaster to him. Jinni was moved by his mercy and keep all the people healthy, however, he died of the leprosy at last. Nowadays, monks of the temple pray to Buddha to memory his merits and virtues everyday.