Located in the eastern part of Tibet and western Sichuan province in China lays what used to be the Tibetan Province of KHAM, inhabited by the proud and fiercely independent Khampa tribes. To this day 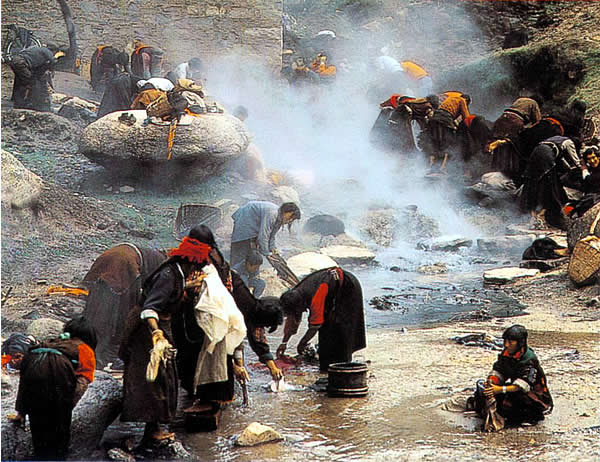 they are easy to recognize: Their cheer size, long hair and traditional clothing separate them from other Tibetans. On the high plateau grasslands in Sichuan, modern day nomadic cowboys tend their yak herds throughout the summer months. In August a large horse festival is held in Litang, attended by thousands of Khampas. For a week they gather in a huge tented camp to show of their skill on horseback, sing and dance. The festival is the highlight of the year for many Nomads who are very isolated the rest of the year.

Kham area was thought in history to be the home town of Tibetans legendary hero - King Gesar. He led his people bravely and fought for life of liberty and at last, They founded a powerful kingdom--Ling kingdom. After long time of research and hot arguing, the Axu pasture in Shiqu county in northwest corner of Suchuan is the place where King Gesar was born and the Ling kingdom sprung up in 6-7th century.People there, usually named as Khambas, became famous for their warlike spirit, a lot of legends and stories could portray you a vivid figure of Khamba.

Khambas are proficient in business trading, From history till now, Khambas have expanded their business of all kinds even far to U.S.A. for them business has unlimited boundary, where there are people, there are their businesses.The visits such as Derge printing house, Seshuel(Sexu) monastry, Gatuo(Katoc) monastery, Gengqyibg monastry, Chamdo monastery, Fatriarchy at Sanyan and Gongjue, Matriarchy at Lugu lake, Sethar monastery, the Karo relics...... are all scattered across this wide area--Kham. The most famous rivers in world like Yangtse river, Yellow river, Mekong river, Purama Putra river, the Sa'erwen river all runs through the deep mountains and valleys. at the west edge of this Kham, the rivers except Yellow river run southward shoulder to shoulder.
In World War II, the U.S.A. airforce flew over the mountains in south of Kham to transport millitary goods to support China Anti-Japanese war. Many airforce men and their loved 'birds' dropped and slept here forever, Here are a lot of stories spreading how the locals help survived airforce men and how the U.S.A. forces fought the Japanese airforce up in the air. That draws tears from you.