At 4,187 meters above sea level, the town of Litang is known as the highest county seat in the world. Situated in the far west of Sichuan Province, 385 kilometers west of Kangding, capital of Ganzi Tibetan 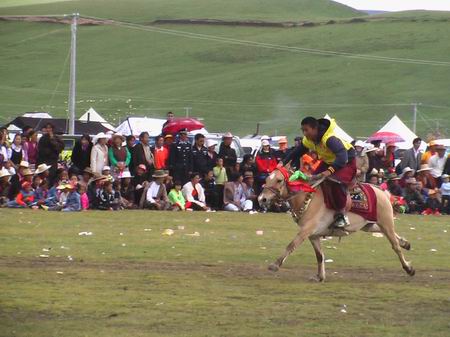 Autonomous Prefecture, Litang is famous for its boundless Maoya Grassland. It is known as Letong in Tibetan, 'le' means bronze mirror and 'tang' means grassland. Once the site of a bazaar at which tea and horses were traded, Litang is the transportation, cultural and commercial center of southern Ganzi. Covering an area of 14,000 square kilometers, the county is populated by seven nationalities, with Tibetans accounting for 94 percent of the total. The local economy is pastoral based. Nomads graze yaks, goats, sheep and horses on Litang's high plateau grasslands, as they have done for generations. Litang is also host to a major horse racing festival in early August, attracting thousands of Tibetans from all over the plateau, and from Qinghai, Sichuan and Tibet. The Tangqincunker Monastery, which is a huge Yellow sect temple with magnificent Palaces and thousands 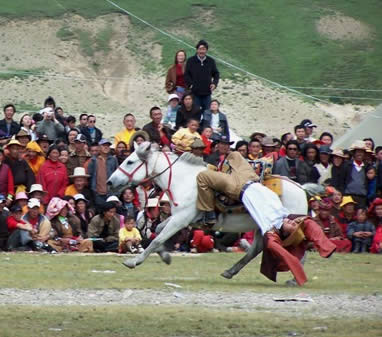 The annual Litang Horse Race, held at Litang from August 1 to 7th, is the most celebrated holiday on the Chinese Tibetan grasslands. The Tibetans will come from far away and set tents to wait for the big days very early. After the wonderful ceremony with traditional Tibetan dancing and songs, the most exciting event is the horse race. The brave riders will take their pretty decorated horses to participate the races and showcase their excellent horse riding skills, such as picking up the scarlet on the back of a fast running horse, shooting at targets while on the gallop, etc. The women are all in their most beautiful best with magnificent jewelry as they shower their applauses on their heroes. The festival is also a good time for trade and various Tibetan-style goods are exchanged here amongst the visitors from all over.