Huizhou Ancient City is one important component of Ancient Huizhou Cultural Scenic Area. It is a key historical and cultural town where you can explore Han Nationality style architectures in the Ming (A.D. 1368-1644) and Qing (A.D. 1644-1911) Dynasties as well as ancient Huizhou culture.

Huizhou Ancient City, located in the center of Shexian County, holds Huizhou State office which has a history of a thousand years. It is referred as one of Four Best-preserved Ancient Cities, together with Lijiang Ancient City in Yunnan, Pingyao Ancient City in Shanxi and Langzhong Ancient City in Sichuan. Local people also call it the Exhibition of Huizhou Culture because it remains its intact charm.
In this charming town, the winding cobbled lanes will lead you to ancient residents’ dwellings and main buildings like theatrical stages, stone archways or teahouses. The imposing manner of these architectures which can date back to Ming (A.D. 1368 - 1644) and Qing (A.D. 1644 - 1911) Dynasties will give you a shot by its grandness, elegance and pristine beauty. What’s more, the white walls and black tiles with extremely exquisite carvings standing out in this town create an indescribable romantic charm.

Huizhou Culture - Important Branch of Chinese Culture
Huizhou is the primitive name of Huangshan City which enjoys a long history and valuable culture. In spite of the vicissitudes of dynasties, Huizhou (or Huangshan City) remained in a stable and safe situation which offered a favorable condition to develop and form Huizhou culture. Huizhou people made achievements in different fields and created lots of genres which had great influence on the whole country. Main genres cover Xin An Rationalism, Xin An Style Painting, Xin An Seal Cutting, Xin An Wood Painting, Xin An Medical Science, Xi An Architectures and so on. 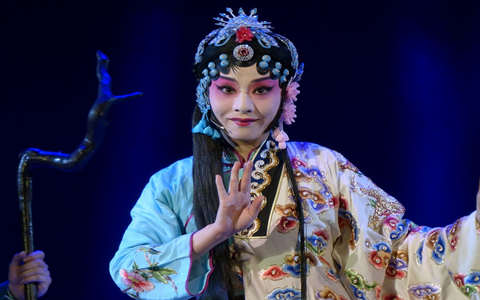 ★Hui Opera is a special kind of opera created by Huizhou artists after they absorbed the essence of Qin & Han Tune and Yiyang Tune. In the middle period of Qing Dynasty, Hui Opera was fashionable enough. In fact, Peking Opera is a combination of Hui Opera and Han Opera.

★Xin An Rationalism is an important branch of Zhuxi's Philosophy, composed of rational learnings represented by Huizhou rationalists. It focuses on learning and high moral principles. Xin An Rationalism had been prosperous for over 600 years and played an important role in the evaluation of Huizhou clan community

★Xin An Style Painting sprouted and formed in the early Ming Dynasty and then developed in the late Ming Dynasty and Early Qing Dynasty. It advocated that painting should be natural but not boastful and painters’ thought needed to be attached to paintings. The modern painter Huang Binghong has developed and enriched Xin An Style Painting.
★Huizhou Style Seal Cutting began at Ming Dynasty and the originator was He Zhen. It stressed on the skill of using brush and knife. The cutting was neat and vivid against the old vulgar and monstrous style. Because of the rise of Huizhou Style Seal Cutting, the status of seal cutting was conformed. 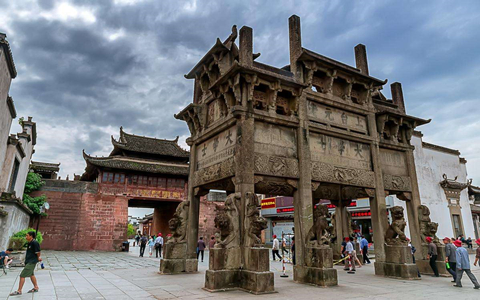 Huizhou Ancient City, as the core of She County, is quite attractive with its landscape of high peaks and crystal water. There is a neat layout of residential dwellings which is interweaved with the old foot bridges, long-standing towers, ancient streets, primitive dams and antique archways. It resembles a historical museum from which you are able to travel to another world across time. There are top 6 attractions listed below.

Xu Guo was an official in the Ming Dynasty who made a great difference in the war against an insurgency in Yunnan, so the memorial archway was constructed to praise his contribution. As a result, Xuguo Stone Archway was completed in 1584. It is China’s ONLY surviving eight-sided decorative archway. Based on eight columns with 12 carved lions in various postures leaning against each other, the planar shapes of Xuguo Stone Archway is like a “口”. 8 doorways are standing toward eight different directions. With a stable structure, majestic manner, and colorful decorative reliefs, Xuguo Stone Archway is the most outstanding symbol of Huihou stone archways and reveals the superb skill of archway-making in ancient times. In the whole archway, you can enjoy rich carvings incorporating dragons and beasts strutting on the top, phoenixes flying on the stone beams, and other mythical creatures lively interspersed on the surface. Getting its name from its special shape of the Big Dipper, Doushan Street was built in the Ming and Qing Dynasties. It is more than 300 meters long, full of ancient dwelling houses, beautiful carvings, ancient wells and various archways. The constructions in Doushan Street embodies the main characteristics of ancient Huizhou style architectures, and the major representative buildings are four family houses with a broad imposing manner, plain model and fine decoration. This street was a gregarious place for ancient Huizhou merchants. These merchants have gone but these precious lanes are left. Walking in this street, you will feel unexpectedly peaceful. Stopping at the end of the street, you may imagine what a busy scene Doushan Street was long long ago.

Huizhou State Office – Landmark of Huizhou Ancient TownHuizhou State Office, occupying an area of 9,800 square meters, is the symbol of Huizhou Ancient City. As the administrative organ of She County in Feudal China, it still keeps its origin layout. The complex is symmetrical along the central axis, following the typical architectural style of state offices in ancient China. The five main buildings on the axis are Nanqiao Tower, Etiquette Door, Law Court, Second Court, and Magistrate Office. The distances between two different buildings are in a fixed ratio, just like the layout of Forbidden City. Some professors say that every state office is a contractible Forbidden City. The three courtyards, two main roads, two towers and ancient city walls form the most featured, representative, and astonishing architecture group, providing a platform for study research, culture communication, tourism and recreation. 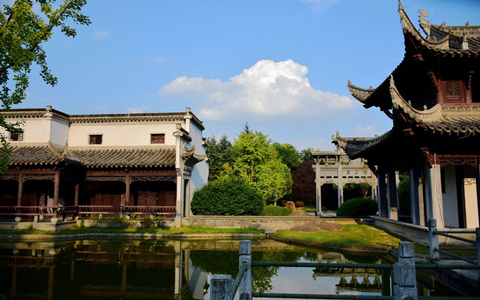 Hui Garden – Showplace of Huizhou
Covering an area of 18,000 square meters, Hui Garden is located in the center of Huizhou Ancient City. Here you can enjoy various buildings with typical Huizhou style, such as Renhe Tower, Deyue Tower, Teahouse, Huifeng Stone Archway, etc. and hundreds of commercial residential houses with antique flavor. It has a collection of memorial arches, ancient dwelling houses and ancestral temples, which are called the Three Wonders of Huizhou Architecture. The combination of white walls and black tiles enjoys delicate features and rich rhythm. The carvings are amazingly fine, which perfectly inherites the essence of primitive Huizhou style carving arts. Hui Garden presents the marrow of “the three carvings of Huizhou”, namely wood carving, brick carvings and stone carving.
Yuliang Ancient Dam – Origin of Huizhou Commerce Yuliang Ancient Dam, located in Yuliang Village of Huicheng Town, acted as a key port of vital traffic lines in ancient times. It is the oldest and largest ancient barrage in the upstream of Xin’an River and the only surviving stony rolling dam in China. Made of pure cobblestones, the 138-meter-long dam has a 27-meter-wide base and 4-meter-wide top. Thanks to the ingenious and scientific design, the whole dam is rather stable. One professor said that Yuliang Ancient Dam is comparable to Dujiangyan Irrigation System in design, construction and function. In ancient times, the merchants usually start from this wharf and go to Hangzhou to do business. Standing in Yuliang Dam, you will feast your eyes with a grand view. The river is like a mirror and the fishes swimming in the water can be seen clearly. Ziyang Mountain is covered with luxury trees and Ziyang Bridge seems like the rainbow across the river. 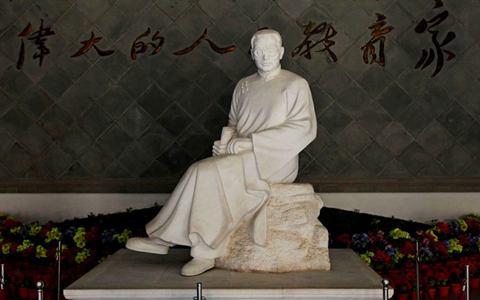 Tao Xingzhi was a great educator born in She County. After he finished his study in the USA, he came back to China and advocated that “life is education, society is school and teaching, learning, and practicing can’t be separated from each other”. As Mukden Incident happened, he plunged himself into anti-Japanese war. Tao Xingzhi Memorial Hall was built in the original Congyi School, and was expanded in 1991 and 2003. The south gate of Tao Xingzhi Memorial Hall is made of gray bricks. Stepping inside, you will find a marble sitting statue of Tao Xingzhi. Going up to the second floor, you can read abundant introduction and literature about Tao Xingzhi in the Exhibition Hall.