There are four wonders in Yellow Mountain which appeal to tourists both from home and abroad, they are the old-shaped pines, spectacular rocky peaks, sea of clouds and the snow in winter.

★Odd-Shaped Huangshan Pines
The pines in Huangshan grow over an altitude of 800 m. Among the thousands of pines, you should pay attention to the following famous ones which you may pass by.
Guest-Greeting Pine (situated at Jade Screen Pavilion, the symbol of Mt. Huangshan, over 1000 years old)
Farewell Pine (situated at Jade Screen Peak, its shape is like saying farewell to the guests)
Accompany Pine (in front of Jade Screen Peak)
Black Tiger Pine (located between North Sea to Begin-to-believe Peak)
Leading Pine (situated at Begin-to-believe Peak)
Phoenix Pine (south of Bright Summit, east of Central Sea Pavilion)
Couple Pine (located between Black Tiger Pine to Begin-to-believe Pine)
Creeping Pine (situated at Celestial Capital Peak)
Putuan Pine (located between Jade Screen Pavilion and Lotus Gully)
★Spectacular Rocky Peaks
Actually More than 120 peaks of Yellow Mountain have got names. There are 72 high and steep peaks over 1000m with widespread grotesque rocks. The three tallest and best-known peaks are Lotus Peak, Bright Summit Peak and Celestial Capital Peak.
Within the area, the towering peculiar peaks are majestic and fantastic and the rocks in the grotesque shapes seem to be a work of carving. The names of the stones and rocks are very interesting and legendary. Some are like birds and animals, including Squirrel Jumping at the Celestial Capital Peak, Rhinoceros Watching the Moon, Stone Monkey Watching the Sea, etc. Some are like human-beings, including Immortal Solarizing the Boot, Immortal Walking on Stilts, etc. Some are like different kinds of stuff, including the Pen Flower Peak, Pen Rack Peak, Flying over Rock, etc. Some are named after Chinese stories and legends, like Su Wu Tending the Sheep Peak, Taibai Drunk Peak, etc. When appreciating the rocks and peaks, you should open your imagination and enjoy.
●Celestial Capital Peak
Celestial Capital Peak is at an altitude of 1810m, one of the 36 peaks of Yellow Mountain. It is called the most thrilling peak of Mt. Huangshan. It is about 1 km south from Jade Screen Peak.
●Lotus Peak
Lotus Peak is the highest peak at 1864 km, southwest of Jade Screen Peak. Its shape resembles a blossoming lotus. From the apex, travelers can view thousands of peaks and numerous ravines in the misty clouds. On a sunny day, travelers can even find Tianmu Mountain in the east, Mount Lu in the west, Mount Jiuhua in the north. When climbing Lotus Peak, you can see many love locks locked forever on the iron chains on the cliff. They are mostly left by affectionate lovers who hope their love will stay forever.
●Begin to Believe Peak
In the Ming Dynasty (A.D. 1368 - 1644), the famous traveler Xu Xiake (徐霞客) advocated that Yellow Mountain was the most beautiful mountain after he returned from a Yellow Mountain trip. Many people agreed. But an official in the Qing Dynasty (A.D. 1644 - 1911) doubted that. So he decided to have a look at Yellow Mountain with his own eyes. And right after seeing the stunning landscapes at where the Begin-to-Believe Peak now stands, he began to believe that the Yellow Mountain truly was the most beautiful mountain. That’s how the peak gets its name.
●Lion Peak
As its name implies, the Lion Peak really looks like a crouching lion with the summit as its head, Refreshing Terrace as its waist and Dawn Pavilion as its tail. It is only about 20 minutes’ walking from Beihai Hotel. The Refreshing Terrace is believed to be the best location for watching sunrise.
●Bright Summit
The Bright Summit is the second highest peak on Yellow Mountain with an altitude of 1860 meters. It is located at the central point of all peaks, which makes it an ideal location for a panoramic view of Yellow Mountain. From the summit, one can easily navigate to both the front mountain and back mountain of Yellow Mountain. It is also a great location for both sunrise and sunset. 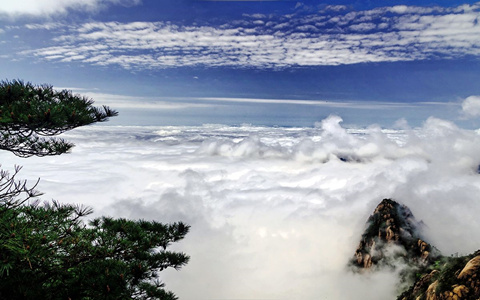 ★Sea of Clouds
Geographically, Huangshan Mountain can be divided into five sea areas. The south of Lotus Peak and Celestial Capital Peak is South Sea, also called Front Sea. The north of Lion Peak and Begin-to-believe Peak is North Sea, also called Back Sea. The east of White Goose Ridge Peak is called East Sea and the west of Purple Cloud Peak and Flying over Peak is the West Sea. The front of Bright Summit is Heavenly Sea. Normally, the best time to enjoy sea of clouds is from November to the next May, especially after snow and rain. It is magnificent before the sunrise and after the sunset. You should never miss this spectacular scene.
Best Places to View Sea of Clouds: Jade Screen Pavilion to see South Sea; the Refreshing Terrace to see North Sea; White Goose Ridge to see East Sea and Cloud Dispelling Pavilion to see West Sea and Bright Summit to see Heavenly Sea. 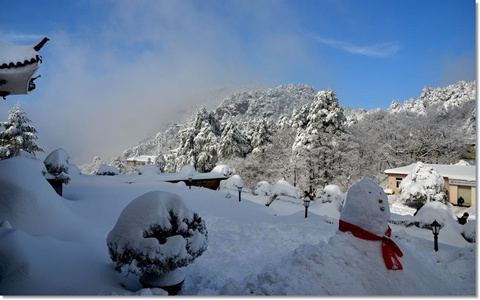 ★Winter Snow
Usually, the winter in Mt. Huangshan is from November to March. During this period, Yellow Mountain is as beautiful as silver fairyland when the peaks, the oddly-shaped rocks and the trees are all covered by a white blanket. Here is how an ancient Chinese poem describes it “With ice columns skyrocketing into the sky, and pure snowflakes blooming on the pine, Huangshan Mountain in winter is the snowy heaven on earth.”
In the early mornings in winter, the newborn sun spreads its rosy lights on the surface of clouds sea. Early sunlight rests gently on the shoulders of Mt. Huangshan, casting a golden hue over the snow-capped valley. With sunlight dancing cheerfully in the mountains, Yellow Mountain presents a splendid picture. If lucky, you can appreciate the “Buddhist Light”, a full-circle rainbow. The optical phenomenon can frequently be seen on Yellow Mountain after a snowfall.
The best locations to view snow scenery of Yellow Mountain are Celestial Capital Peak, Lotus Peak, Xihai Grand Canyon, Jade Screen Peak, Cloud Valley Temple, etc.