Xidi is a time-honored village with a history of 960 years. It was first established in the Northern Song Dynasty (A.D. 960 - 1127). The village was originally called Xichuan, owning to the three streams in the village flowing from east to west. The rise of Xidi Village was closely tied to the fortunes of the Hu Family, who was the offspring of the Emperor Li Ye in the Tang Dynasty (A.D. 618 - 907). By 1465, during the Ming Dynasty, Hu family had made great fortune in business as merchants, and they began to build many houses, ancestral halls, pathways, and bridges there. In the middle of the 17th century, some members in Hu Family sought for official careers and boosted the development of the village. From the 18th century to 19th century in the Qing Dynasty, Xidi reached its highest splendor with 600 prosperous households at that time.Now,Xidi Ancient Village, together with Hongcun, was listed as World Heritage Site in 2000. Located in Yixian County in Huangshan, it has 300 ancient dwelling left from the Ming and Qing Dynasties, among them, 124 are well-preserved. 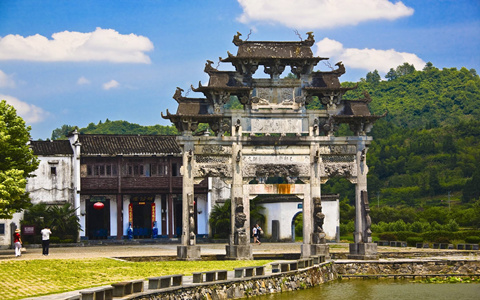 Xidi Ancient Village is full of primitive simplicity and elegance. It is a typical example of Huizhou culture with exquisite three carvings architecture and cultural scenery. The main road runs in an east-west direction and is flanked by two parallel streets. Getting into the village, you’ll see Lingyun Attic, Hu Wenguang’s Memorial Archway, Ruiyu Courtyard, Taoli Garden, East Garden, West Garden, Dafu Grand Hall, Jing’ai Hall, Lvfu Hall, Qingyun Pavilion, Yingfu Hall, Dujing Hall, Yanggao Hall, Shangde Hall, etc. Following the road to travel from west to east and you’ll explore all the essences of Xidi Ancient Village.
Hu Wenguang’s Memorial Archway
Governor Hu Wenguang’s Archway is erected at the entrance of the village and made of gray Yixian stone. Built in 1579 in the Ming Dynasty, it has a history of 400 years. It is a representative of Huizhou architecture, and a treasure of Chinese stone architecture.

East Garden The East Garden consists of the cool hall, main hall, and antechamber. The main hall is called Houguang Hall, used for the welcome and reception of distinguished guests; antechamber is used to receive relatives and cool hall is for the owner to study and learn. West Garden West Garden is divided into front garden, middle garden and rear garden. Entering the garden, you’ll have a feeling of entering a classical Suzhou garden with exquisite and elegant layout. The architectures, stone carvings, rockeries, fish ponds…will bring you a taste of Hui-style culture. 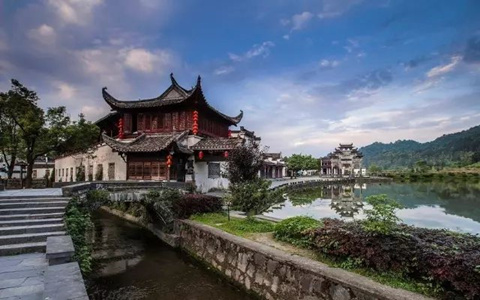 Zouma Building(Lingyun Attic)
Zouma Building, also called Lingyun Attic, was first built in the Qing Dynasty in the reign of Daoguang Emperor. It was built to greet the relatives of daughter-in-law. The present Zouma Building was rebuilt according to the original structure. Travelers can enjoy Huangmei Opera, Toss colorful silk balls, tea ceremony and other activities here.