In China, when people talk about Huangshan, he may refer to two different places. One is Huangshan City, which is one tourists’ city in Anhui Province, and Tunxi District is the downtown area. The other meaning is Mt. Huangshan (also called Yellow Mountain and Huangshan Mountain) in the southern Anhui province, well known for its scenery, sunsets, peculiarly-shaped peaks, winter snow.
Huangshan can be reached conveniently by flights or high speed trains from many domestic cities and several international cities. Most popular gateway cities to Guilin include Beijing, Shanghai and Hangzhou. Beijing and Shanghai are two top tourist destinations with many international flights, so they can be reached easily. From Beijing and Shanghai, there are nonstop flights and high speed trains to Huangshan. Hangzhou is quite close to Huangshan and you can transfer between them within 2 hours usually. Moreover, Hangzhou Huangshan High Speed Rail is one of the most popular high speed rails for the wonderful landscape.

Get to/away Huangshan City
★By Air
Taking a flight is the most effective way to get to Huangshan. Currently, there are over 20 domestic airlines and 5 international airlines operating to/from Huangshan Tunxi International Airport. Thus, you can directly fly to Huangshan from top Chinese tourist cities, including Beijing, Xian, Guilin, Chengdu, Chongqing, Xiamen, Zhengzhou, Guangzhou, Wuhan etc. by domestic flights as well as some other cities including Hong Kong, Taipei, Seoul, Busan and Singapore by international flights. 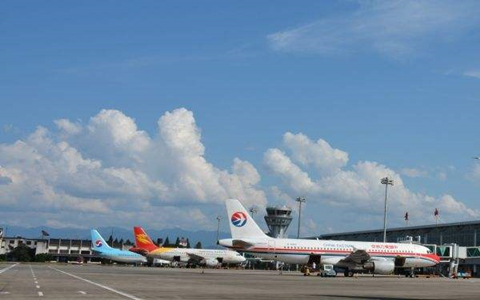 Overview of Huangshan Tunxi International Airport
Serving for the tourists to Yellow Mountain, Huangshan Tunxi International Airport (also known as Tunxi Airport) is at Tunxi District, about 7 kilometer away from the downtown city and 66 km away from the Yellow Mountain. As the main international airport serving for Huangshan and surrounding tourist areas, it is one of the most important transfer spots to Yellow Mountain. With a good location near downtown Huangshan, it’s quite easy to transfer from Huangshan Tunxi International Airport to your hotels in Huangshan City. There are airport shuttle buses running between the airport and the downtown at costs around 6 RMB. Taxi is also accessible and efficient. With a transfer in Huangshan Bus Station, you can take a bus to Yellow Mountain, Hongcun Village, Xidi Village and other surrounding atractions.
★By Train
Nowadays, traveling by train, especially high speed train becomes more and more popular in China. Because you can not only enjoy the comfortable environment, but also get a fantastic view of outside scenery. Till now, there are more than 50 trains running to/through Huangshan (North Railway Station) from some major cities in China. You can easily get to Huangshan from Beijing (5 ~ 6 hours), Shanghai (2.5~3.5 hours), Hangzhou (2 hours) and Suzhou (3~4 hours). Some other cities like Xian, Guangzhou, Qingdao, Changsha, Zhengzhou and others.

★Hongcun and Xidi to Yellow Mountain Only a Huangshan tour combing Yellow Mountain and at least one ancient village can be a complete Huangshan tour. The distance between Tangkou Town and Hongcun Village is 35 kilometers and the driving journey takes about 45 minutes. There are daily buses operated between Hongcun Village and Yellow Mountain as well. The bus goes every one hour between 06:50am and 14:50pm, and the last bus leaves at 16:30pm. Just like other to/from connecting Hongcun, Hongcun-Yellow Mountain buses also stop in Xidi Village.★Inner Traffic in Yellow MountainHiking is the most popular way to travel Yellow Mountain. However, cable car and sedan chair are helpful to save your energy and time.Cable Car: If you are not a serious hiker and plan to have a few days to explore Mt. Huangshan, the cable car is a must while climbing the mountain. It will not only save you time and effort, but also help you get a bird’s eye view of Yellow Mountain and its surrounding area. There are four cableways, containing Yungu Cableway, Yuping Cableway, Xihai Ropeway and Taiping Cableway. You can decide which one to choose according to your visiting route. All of them will give you a wonderful experience. Check detailed Huangshan Cable Cars> Sedan Chair: Sedan Chair Transport Service is a traditional transportation vehicle in Yellow Mountain. It’s quite safe to use this service because the chairs are well-designed and the bearers are highly-treated. Hiring a sedan chair, travelers are able to travel beautiful Yellow Mountain with less physical-demanding hiking. It is frequently loved by the aged and children. This service is charged in regulated price according to the length and different levels.

Go to to Hongcun and Xidi