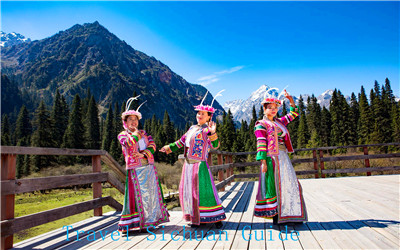 Living in the Minshan mountain range, 250km away from Chengdu, the people of the Baima(White Horse) Tibetan Tribes are well known for their unique costumes and singing styles.

Their ancestors created their own spoken language, but no written language. They carry out a strict marriage system(they intermarry in the tribe only). Every tribe member wears a white fleece felt hat made by himself with one or more cock feathers on the hat as a symbol of the tribe. The White Horse Tibetan Tribe's village is over 100 kilometers from JiuZhaiGou Scenic Area. There are about 4,000 people living in the village. They make their living on planting maize, and Qingke barley and Chinese broad beans.

Qiang Ethnic Minority
Numerable references dating back as far as 4,000 years in Chinese history record the Qiang tribes. Small groups of aggressive nomads roamed the rugged landscapes of the Tibetan borderlands. Sandwiched between the wild war-like Khampa Tibetans to the west and the Chinese to the east, these various nomadic tribes were known as 'Qiang'.
Today, the descendants of these people still live scattered throughout western Sichuan Province-a land of breathtaking beauty, a land of gushing rivers and 18,000 feet high snow-capped mountains. Such a geographically isolated place has proven to be a barrier to the Gospel. Catholic work in the late 1800's and Protestant missions in the early 1900's established several churches amongst the Qiang, but today little evidence of spiritual light remains. Almost no Qiang have ever heard the Name of Jesus before, although it is reported that in the last few years a small handful of Qiang have believed in the Lord, are meeting together in a home. In 1960 the Chinese government began to form their lists of minority groups in China. In the ethnically diverse mountains of western Sichuan they grouped together a number of small, independent tribes under the banner 'Qiang' and still more groups they bunched together under the official 'Tibetan' nationality.
Today the Qiang minority comprises four separate languages, and eight dialects. In their hasty attempt at officialdom, the government badly botched ups the classification of the western Sichuan Peoples. Still today some 50,000 Qiang speakers are counted as Tibetans. Many of the customs and beliefs, which formed the identity of the Qiang, have been set-aside since the start of Communist rule. The current generation has been educated in atheistic schools, where they have been made to ridicule their parents' religious beliefs, which are branded as 'superstition.' For centuries past the Qiang 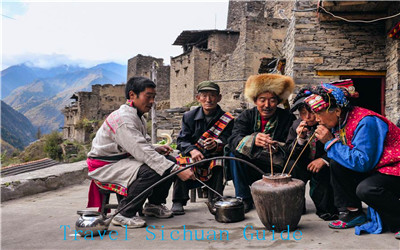 practiced a bizarre worship using white stones. Still today in rural areas you can see small piles of white stones piled up on the corners of Qiang rooftops or at the entranceway to protect a village. Qiang temples in the past contained only a white stone as the centerpiece of worship.

Not possessing any of the multiplicity of idols that other groups in the area have, the Qiang believed that the white stone represented the Supreme Being, leading some writers to speculate wildly that the Qiang may have been one of the 'lost tribes of Israel,' a claim that is highly unlikely, to say the least. Qiang legend tells of two tribes centuries ago who fought each other. One tribe ambushed the other, who being caught unprepared, picked up sticks and white stones to fight with. Despite their disadvantage they annihilated their enemies, and won the right to live in the fertile valley that remains their home till today. From stories like this white stones took on a powerful, mystical value.