Tibetans of Jiuzhaigou believe in the Benbo-Sec Religion, which was introduced to Aba Prefecture where Jiuzhaigon is located, from Tibet in the 2nd century B. C. It was integrated with primitive local wizardry into the Benbo Sec and became dominant in the 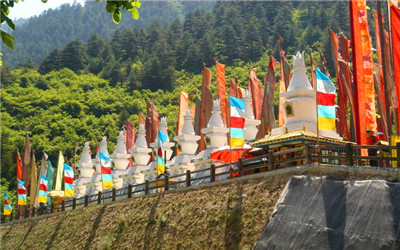 6th century. In the 7th century, the Tibetan Buddhism was introduced, and won in Furious conflicts against the Benbo. Although Buddhism became prevalent, the Benbo survives and develops into a special sec of Tibetan Buddhism, due to its unique religious and culture features. Even today, there are over 60 Benbo monasteries and temples in Aba Tibetan-Qiang Nationality Autonomous Prefecture.

Longda is a product of the primitive Benbo belief to worship and sacrifice for natural gods, as well as one of the main sacrificial ceremonies of Tibetan Buddhist religion. Longda has two kinds, made of paper or cloth respectively, on which patterns and scripture writings arc printed. The paper Longda is set free in winds; the cloth ones arc stringed together with a rope, being hanged on bridges, sacred hills and Yaze sites.
Tibetan religious believers set free Longda to pray for blessing and auspicious time. The 6-character or 8-character incantation is printed on Longda, and said to be of boundless magic power.

Jingfan is Called 'Geda' in Tibetan language, it literally means the banner on the gate, it is said that, families of ser vicemen in the Tufan Period (of Thug Dynasty 617-907) hanged the army banners on their gates to honor the family. Later, the army banners turned to be of religious implications, and were in fact the integrated product of religious culture and that of central plains of China. For different purposes, the banners vary in length ranging from seven to dozen meters, in blue, white, red, green and yellow each representing the sky, cloud, fire, water and land, or wood, gold, fire, water and soil according to the five-element theory. The color and religious writings on banners are selected on the basis of the anthroposcopy of the owner/believer. According to the five-element theory, five elements represent the primary substances that form the world, and all activities of the universe take place by following changes of each (or all) element, including your destiny, 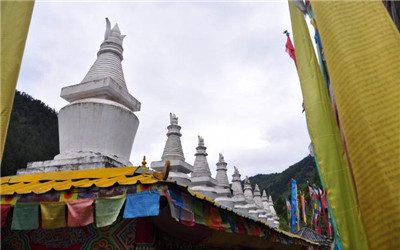 your vitality and you prosperity. The Jiuzhaigou religions banner is an integral combination of the five-element theory and Mizong incantation, a proud creation of Tibetan Buddhism prayer wheels, no matter large or small, are often seen in Jiuzhaigou. Believers spin small ones all the way wherever they go. Large ones are fixed in the hallway of the temple or monastery, and inside the canister are religious scriptures. For one single trip, believe will have to spin all the canisters or barrels once while murmuring chants. One turn of the canister or barrel equals 100 times of religious chanting, and as a result, their merits and virtues multiply. In Jiuzhaigou too, there is a water spinning wheel that is turned by the force of water all day and night. In addition, to above ways, believers can walk circling around the temple, Buddhist pagoda, Buddhist Hall, and sacred mountain once or even hundreds of times. This activity is easy and can be done at any time and anywhere. It is believed to be a finest way to accumulate your merits and virtues, therefore, a special ritual among Tibetan believers for a long time.