Mt.Emei lies in the southwestern area of Sichuan basin in China. Its main peak is called the 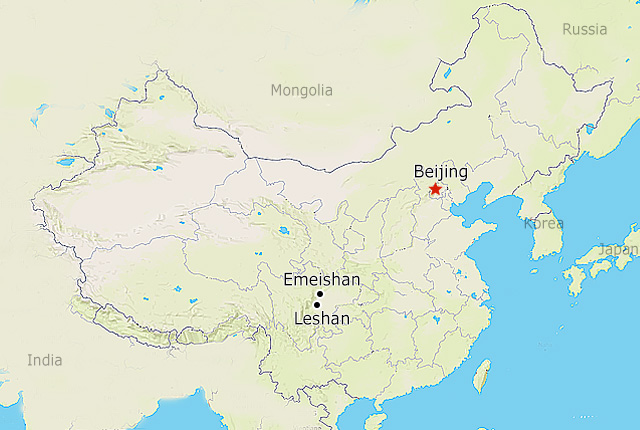 'Golden Summit' while the highest peak, the Wanfoding Summit is 3099 meters above the sea level. As the famous scenic spot and the Buddhist mountain in China, UNESCO inscribed Mt.Emei in the World Natural Heritage List in 1996.

Mt.emei is blessed with clouds Sea, Sunrise, Buddhist halos, Saint Lamps--these four great spectacles. The central clustering ridges and peaks, wreathed with thin mist, jade green, spurting waterfalls, twittering bird, and the fragrance of flowers, give Mt.Emei the reputation of our country's famous scenic spot for tourists. Furthermore, the site also contains ancient Buddhist temples, thus Mt.Emei is one of four famous Buddhist Mountains in China, and known as the place of Buddhist Rites of Puxian (Samantabhadra bodhisattva). Generally speaking, there are some beautiful titles of Mt.Emei, such as Kingdom of Plants, Paradise of Animals, Geological Museum, and the Buddhist world.

Leshan is about 180km south to  Chengdu and 20km west to Emeishan, located in the southwest area of Sichuan province.
Leshan is a cultural city with a history of more than 3000 years and a mordern city as well. Because of the rapid city development most of the old buildings have been torn down but fortunately the Giant Buddha remains intact. Nowadays, it attracts milions of visitors from home and abroad.
Leshan Giant Buddha, the largest stone sculpture of Buddha in the world, sits at the confluence of the Minjiang, Dadu and Qingyi rivers. According to records, the carving of this giant Buddha was begun in the first year of the reign of the Tang Emperor  Xuanzong (713 AD), and completed in the 19th year of Emperor Dezong (803 AD), a total of 90 years.
Taking the shape of a Maitreya Buddha,who is depicted barefooted with drooping ears and has his hair arranged in a spiral topknot. His chest is exposed and his hands rest on his knees. Carved from the side of the Lingyun Hill, with his head level with the cliff top, the gigantic stone sculpture faces Mt. Emei, with the rivers flowing below his feet.
Looking dignified and solemn, the Buddha measures 71 meters in height. His shoulders are 28 meters across. The head is 14.7 meters long and 10 meters broad with total 1021 buns of hair on it. The instep, which is 8.5 meters wide, can accommodate 100 people. The toe is large enough to accommodate a dinner table. Taller by 17 meters than the standing Buddha in Afghanistan, Leshan Giant Buddha is therefore the tallest Buddha in the world and in 1996, it was added to the World Natural and Cultural Heritage List.