Barkhor Street in the center of Lhasa,is more than 1300 years old. As the famous business center and circumambulation in Lhasa, this street block needs a visit to enjoy its old buildings, specialties, food, stories, etc. to know about the Tibetan prosperity and the rich Buddhist custom in the old city. 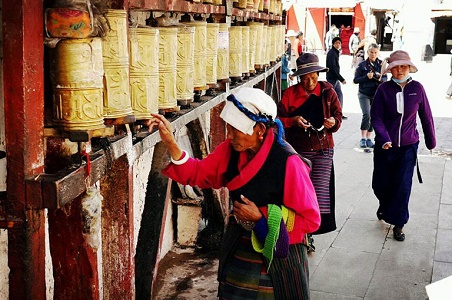 Barkhor Street (八廓街) is a must-go place in Lhasa, because it not only best preserves the original look of Lhasa from the ancient time, but also gathers the local Tibetan customs, religions, economy, culture, handicrafts, etc. together. Situated at the center of Lhasa old city, Barkhor Street is the most prosperous business street and the famous circumambulation in Lhasa and is called the “Holy Path” by Tibetan people. Barkhor Street was first built over 1300 years ago and consists of four streets in a circle shape, which measures more than 1000 m long. Being one of the most featured and charming cultural and historical street blocks nationally, Barkhor Street is the historical development epitome of Tibet from the remote time to nowadays, therefore, you can enjoy your tour to feel the cultural custom of Tibet and enjoy the charm of its many aspects.

In the 7th century, the Jokhang Temple (大昭寺) was built under the order of Songtsen Gampo (松赞干布) who was the Tibet king at that time, meanwhile, four palaces were also built around for the king to supervise the progress, and these four palaces were the oldest buildings in Barkhor Street. After the completion of Jokhang Temple, multiple pilgrims came here and treaded the origin path of Barkhor Street around the monastery, which gave the street its name of “Barkhor” to mean the street block surrounding Jokhang Temple. And after the 15th century, when the Jokhang Temple was the spreading center of Buddhism, a lot of shops, Buddhist hotels, schools, small monasteries, etc. appeared gradually. And then many businessmen, tourists and pilgrims from other countries like Nepal, India, the Kingdom of Bhutan, Mongolia, etc. came here and Barkhor Street became a complex block with religion, sightseeing, culture, business and shopping step by step. 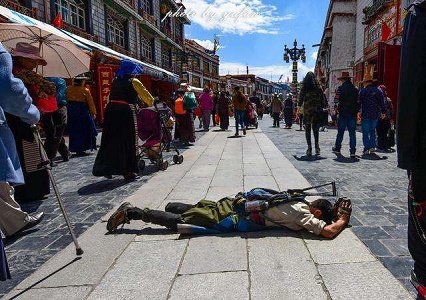 Things to Do in Barkhor Street

As a must-visit place in Lhasa with rich cultural and historical charm, Barkhor Street has a series of interesting things for you to experience.

Visit the Impressing Scene of Circumambulation

The circumambulation (转经道) is the essence of Barkhor Street for the big influence of the Jokhang Temple here. Being one of the three important circumambulations in Lhasa, circumambulation in Barkhor Street has been the sacred road among pilgrims from all directions. In the belief of Tibetan Buddhist, fetching a circuit of the Jokhang Temple clockwise indicates to worship the sacred Buddha Shakyamuni inside the temple.And at the specified time in the nightfall every day, you can see this grand scene of the pilgrim’s walking. Believers wearing distinct clothes unknown from each other from different regions in Tibet start to walk along the circuit clockwise, turning their prayer wheel to worship sincerely, like got an order. And this circumambulation will tell you the magic about pilgrimage and the featured activity of Tibetan Buddhism. 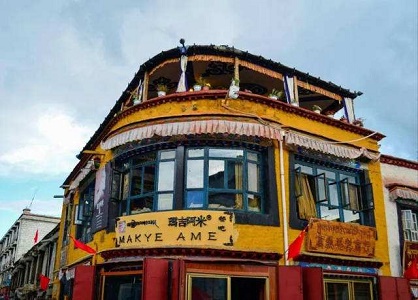 Makye Ame (玛吉阿米) Restaurant painted in yellow is located at the southeast corner of Barkhor Street. People coming to Lhasa would surely pay a visit to this 2-floor building because it is where the 6th Dalai Lama called Tsangyang Gyatso (仓央嘉措) met his lover. Tsangyang Gyatso is not only an outstanding religious spiritual leader, but also a brilliant romantic poet in Tibetan history. One day, when he was having a break in Makye Ame Restaurant, a charming young lady came into his eyes. After that, Gyatso wrote the famous poem to express his inner emotion to this gorgeous girl who is beautiful as the moon. So you can visit this place to feel the romantic story and appreciate a series of art works, like paintings, photos, handicrafts, original edition books of Kafka, Eliot, etc. 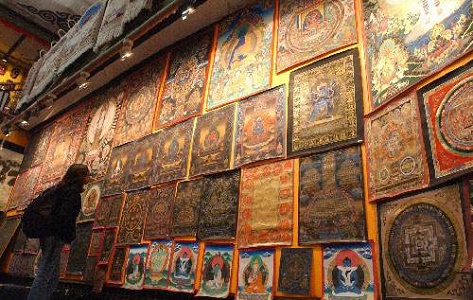 Since Barkhor Street is the most prosperous commercial street in Lhasa, you can take your time selecting your favorite items in each shop. There are more than 120 shops and over 200 stalls along the street selling more than 8000 sorts of commodities, from religious items like prayer wheelers, yak butter lamps, prayer flags, Buddhist text, beads, etc. to daily necessities like harness, snuff bottles, Tibetan shoes, knifes, hats, bowls, tea, dried meat, etc. Moreover, you can also find many special items full of Tibetan characteristics, such as Thangka paintings, Tibetan blankets, gold and silver jewelries, antiques, famous medicines, and specialties from many places in Tibet. Besides, there are lots of imported goods from other countries, like India, Nepal, Burma, and so on. 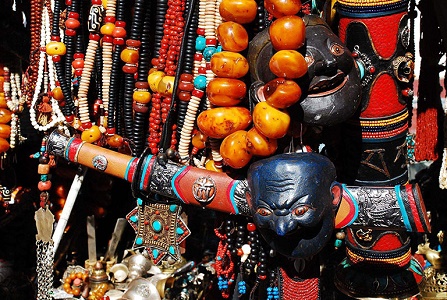 For the well protection of the old city, you can visit some meaningful historic sites near Barkhor Street to feel the strong culture in Lhasa. Qujie Podrang (曲结颇章) in the No. 24 courtyard on the North Barkhor Street is the first building among the four great palaces as well as the first in Barkhor Street and served as the temporary imperial palace for Songtsen Gampo. Besides, Buddhist text printing house, mosques and other religious cultural places can be found near Barkhor Street, where you can pay a visit and feel the mysterious mix of multi-culture in Tibet.

Located at the center of Lhasa city, If you are the independent traveler,Barkhor Street is super easy to get to by different vehicles like buses, taxis, tricycles, bikes, etc.

(Airlines from and to Shanghai, Guangzhou, Shenzhen, Chongqing, Chengdu, and Beijing are available every day.)

In Barkhor Street, you can try the local typical special Tibetan food, like the featured dry yak meat and mutton, barkey wine, buttered tea and other delicious dishes of vegetable and meat. And since most meat dishes are processed with thick flavor, oil frying, roast, you can taste the appetize and some sweet food to have a different try. Also, Sichuan food that is especially tasteful and famous for its hot pot can be found super easily. And you will see there are many Nepal restaurants that are very popular with the curry flavor and others in and around Barkhor Street. Besides, you can enjoy diverse kinds of delicious food from many places in China to feel the combination of food culture in Lhasa. What's more, you can choose various western food and snacks, like beef sticks, etc.

1. Keep yourself safe and especially don't stroll too late at night, since there are many narrow alleys in Barkhor Street and you may easily get lost.

2. Avoid doing vigorous activities in case of altitude stress for the Barkhor Street is 3650 m above the sea

3. Knifes are not allowed to take abroad the plane, and you can send them at the general post office on the Middle Beijing Road near the north of the street block if you would buy

4. Local Tibetan food, particularly the meat, is featured at the original flavor of the food material, and it's better to taste the beverages first in case of gastrointestinal upset

5. Wear Suitable to protect from the strong sunlight, but do not wear hat when visiting inside the Tibetan monasteries, and ladies do not wear skirts visiting here

6. Follow the Buddhist manners : talk in low voice, always be respectful of others, reflect on the Buddha's teachings, remain quiet when visiting temples

7. Take pictures according to the local customs and rules. And you can take pictures of the local Tibetan people after getting their permission