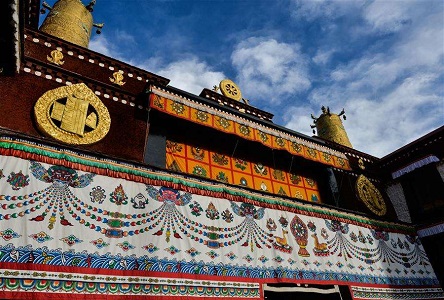 Recommended Time for a Visit:2 hours

Included on UNESCO's World Heritage list in 2000 as part of the Potala Palace, the Jokhang Temple is the ultimate pilgrimage destination for Tibetan Pilgrims.

The Tang Dynasty (618 - 907), was characterized by economic prosperity and great progress in politics. During this time, China was considered the cultural and political center of the world. King Songtsem Gampo (617 – 650, the 33rd king of Tibet) was the leader of the Tubo (or Tibetan) Kingdom. He actively promoted Buddhism in that region and under his reign, Tibet achieved great progress in social innovation and realized the integration for the first time. In order to promote friendly relationships with the neighboring countries, he successively married Princess Bhrikuti of Nepal and Princess Wen Cheng of the Tang Dynasty. When the two wives arrived there, each brought a statue of Jowo Sakyamuni. During this time, most people lived in tents and there were few palaces. To house the Buddha brought by Princess Wen Cheng, King Songtsem Gampo constructed the Little Jokhang. Jealous of her, Princess Burikuti asked Gampo to build a Jokhang for her as well. Therefore, in 647 the giant complex was built. 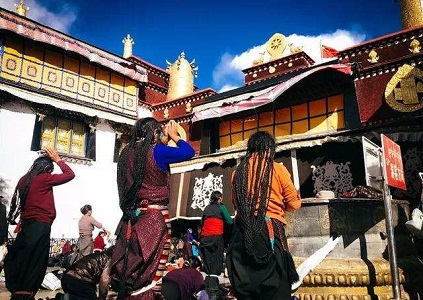 The Jokhang Temple was built on the former site of a lake. According to the legend, the lake site was chosen after many failed attempts to build a temple in the region. Prior to this, every time a monastery was built, it would collapse. Confused by this phenomenon, Princess Bhrikuti turned to Wen Cheng for help. Being a learned woman, Wen Cheng told the Princess that the geography of Tibet was very much like a hag, with the lake at the heart. In order to build the monastery, Wen Cheng advised they must demolish the hag by filling and leveling the lake using 1,000 goats to carry soil from a mountain far away. When the construction work was done, it was called Ra-Sa-Vphrul-Snang ('ra' meaning goat and 'sa' meaning earth in Tibetan) to commemorate those goats.

Whether the legend is true or not, the Jokhang Temple brought Buddhism into this land and became an inseparable part of Tibetan history and culture. The city of Ra-Sa grew around the temple and over time, become known as Lhasa, a holy land.

The Jokhang Temple is a four-storey timber complex with a golden top. It adopted the architectural styles of the Tang Dynasty, as well as those of Tibet and Nepal.

Standing in its square, one can view the entire complex. On the square there are two steles, one recording an alliance between the king of Tibet and the emperor of the Tang, the other portraying the teaching of the local people to prevent and treat smallpox, a once incurable disease in that region.

In the eastern section of the yard there are rows of votive lights. These flicking lights provide a path leading all the way to the main hall. The main hall, over 1,300 years old, is the oldest shrine of the complex. Above the major entrance, there is a Dharma Wheel (chakra) flanked by two deer. This represents the unity of all things and symbolizes Sakyamuni himself. On both sides of the passageway, paintings showing the building of Jokhang Temple, and renderings  from the seventh century are adorned on the wall. The statue of Sakyamuni at age 12 sits in the middle of the hall. It has been gilded many times and decorated elaborately with jewels typical of Tibet. Statues of King Songtsem Gampo, Princess Wen Cheng and Princess Bhrikuti are on the second floor. On the top floor, there are four gilded bronze tile tops crafted in the emblematical Tang  style.

The statue of Sakyamuni is a rare treasure. When Sakyamuni was alive, he disagreed with the idea of 'personal worship' and di not allow likenesses of himself to be created. Only three statues, designed by he himself, were permitted to be sculpted during his lifetime. The first is a likeness of him at age eight; the second shows him at age twelve when he was still a prince of India; and the third is of him as an adult. The statue kept in the Jokhang Temple is the statue of Sakyamuni at age of twelve. It was presented to the king of the Tang Dynasty and brought to Tibet by Princess Wen Cheng.

Get to Jokhang Temple