Namtso Lake is a giant sapphire on the pure land of Qinghai Tibet plateau. Travelers can't help being attracted by its fascinating landscape and holiness and beautiful legendary. 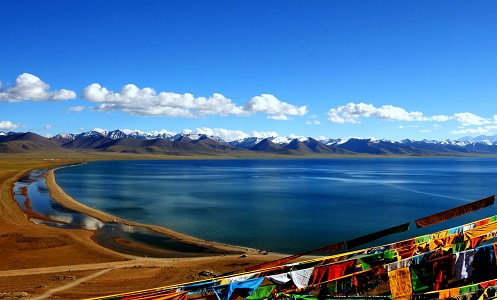 Namtso Lake, located in central region of Tibet, is one of the largest lakes in Tibet and China. It covers more than 1,920 square kilometers shaping lake a rectangle, and locates about 4,718 meters above the sea level, which makes Namtso the highest lake in the world.

Namtso Lake is one of the most popular tourist destinations in Tibet. It was complimented as "the most beautiful lake in China" by National Geography. Namtso is featured stunning landscape which consists of pure water, blue sky, snow mountains, wild lives, and long lasting influence on Tibet religion.

Namtso Lake, in Tibetan, means "the Heaven Lake". It is honored as the holy lake both for Tibetan Buddhism and Bön. Natmso Lake is the birthplace of the ancient Zhang Zhung which was a powerful kingdom 18,000 years ago on Tibet. Today, Namtso is more popular among Buddhists. It is believed to be the ashram of Cakrasamvara of Tibetan Esoteric Buddhism. There are four monasteries situated on the four directions of Namtso.

It has become a tradition for Buddhists to make the Kora around Namtso Lake. Pilgrims walk or prostrate along the lake side, and pray to the Lake. The year of Goat is the best year to do the Kora. 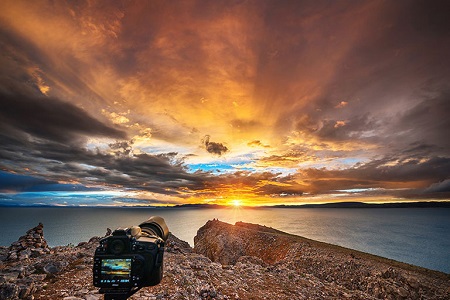 Namtso Lake has broad and vast stretching of waters as far as you can see. The pure water waves slightly under the pure and blue sky. Along the shore are enormous well-proportioned Mani stones. The colorful prayer flags hanged on the hills and monasteries make Namtso Lake holy and mysterious. A lot huge stones have existed along the Namtso for thousands years, and are related to some beautiful Tibetan stories.

Namtso Lake is also the heaven for animals. It is natural pasture for nomads of northern Tibet. You have chance to see the sheep and yaks grazing leisurely on the grassland. Many wild animals also inhabit here, such as wild yaks, donkey, wild fox, etc.

The sunset and sunrise are most exciting moment for photography which both last only about a half hour. The sunrise occurs about 7 o’clock usually earlier in summer and later in winter. Shoot the peaceful southern side of Tashi Penisula and golden Nyainqentanglha mountains. The sunset happens within 8 pm to 9 pm. Shoot the northern lakeshore of Tashi Penisula. Actually, the landscape of Namtso Lake is diverse. You can also find many amazing scenes in other hours. 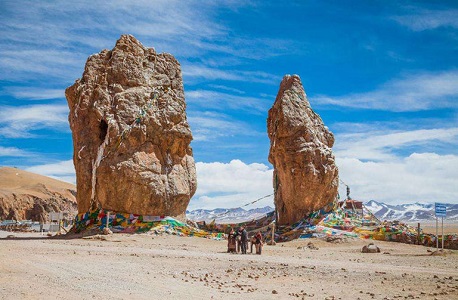 Yingbin Stones – two huge and tall stones stands on the lakeshore. Colorful prayer flags hang over the stones, and wave in the wind. Marnyi stones and yak skulls surround the Yingbing Stone. This is the perfect foreground scene for shooting.

Gassho Stone – two large stones fold like two palms. This site is a great place to shoot the sunset. Chase the golden sunlight passing through crevice of two stones. 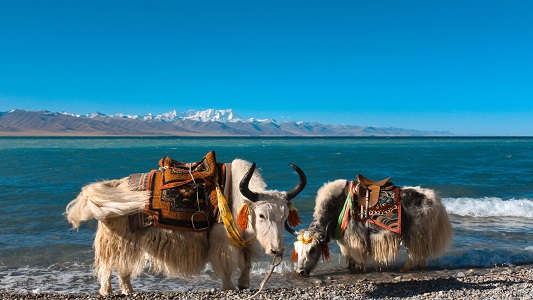 Note: there are dressed yaks and sheep led by local Tibetan. It charges to take photos, or photo with yaks or sheep.

Namtso Lake is located on the junction between Damxung County and Baingoin County. Due to better facilities and road condition, Damxung County is often used as the final transfer base for Namtso Lake.

Tourists usually visit Natmso Lake from Lhasa. There is highway connecting Lhasa city and Namtso Lake with a length of 220km. The visit to Namtso is usually arranged after the two or three days of Lhasa tour, which is a great add-on sightseeing for the cultural experience in Lhasa.

Due to the extreme weather and environment, there is no hotel at Namtso Lake. Tourist can only stay at tent guest houses or camp at the Tashi Penisula shore. Travelers can go to Damxiong County for better accommodation. But if you want to watch the sunrise, you must stay nearly to the lake. Usually, travelers transfer to Namtso in the early morning from Lhasa, and sightsee 2~3 hours, and drive back to Lhasa because of the poor accommodation and high altitude.

Only some basic foods of Sichuan Cuisine, Tibetan food and snacks are offered in the eateries in the tent area. And the prices are much higher than in Lhasa. You are suggested to bring some food or snacks from Lhasa.

The weather is changeable. Rains, hail and snow usually come unexpectedly. So bring both thick and portable clothes with you. Also bring sunglasses and sun cream to prevent from strong sunlight and ultraviolet ray.

The altitudes of Namtso Lake area are about 5,000 meters, nearly 1,100 meters higher than that of Lhasa. And the oxygen is very thin especially during early morning and night. So you’d better make full preparation before your visiting. Keep a good healthy, and take preventive medicine if necessary.