1)To protect the relics, the number of tourist allowed to visit the Potala Palace is limited. The entry tickets are not easy to get, especially in travel peak season. It is recommended to book advance;

2) To ensure the smooth visiting, and enlarge the capacity of tourists, only an hours' visiting is allowed during peak season.

Even a short glimpse of Potala Palace is enough to leaven a forever imprint on one's bottom of heart, and drive him from faraway on the globe to witness this magnificent wonder.

The Potala Palace, colossal architectural complex uprising more than 130 meters on the Red Hill of Lhasa valley, is the landmark of Lhasa as well as the symble of Tibet. It used to be the religious, political and cultural center of the whole Tibet, also the residence of Dalai Lamas. The fabulous beauty of the architecture, long-standing history and great religious influence make Potala Palace world famous around the world. 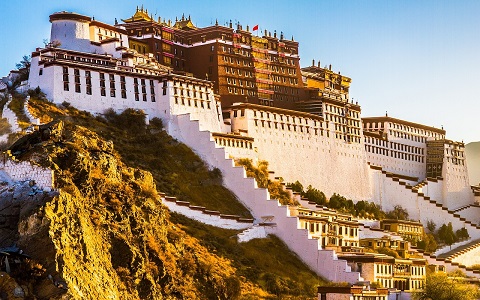 In December, 1994, the UNSESO announced Potala Palace as a World Heritage Site. Later in 2000 and 2001, Jokhang Temple and Norbulingka were added to the ensemble as extensions to Potala Palace. The UNSESO declared “the scale and artistic wealth of the Historic Ensemble of the Potala Palace, which represents the apogee of Tibetan architecture, make it an outstanding example of theocratic architecture, of which it was the last surviving example in the modern world.”

The history of Potala Palace can be traced back to its original erection by Srongtsen Gampo around 1,300 years ago. The Fifth Dalai Lama reconstructed, and the later successors expanded it to present scale. 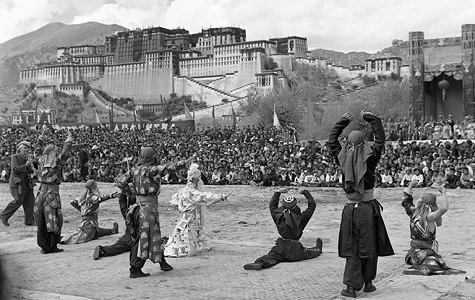 In the early seven century, the emperor of Tubo Kingdom set Lhasa as capital city and married Princess Wencheng of Empire Tang. He ordered to build a palace on the Red Hill as gift for Wencheng, also the residential palace for him and Wencheng. The erection completed in 631. It is said that total of 999 rooms and one meditation cave were built.

After the extinction of Tubo in 842, the Potala Palace suffered great damage from constant wars and natural disasters. Only a small hall Phakpa Lhakhang and the meditation cave Chogyel Drupuk survive. 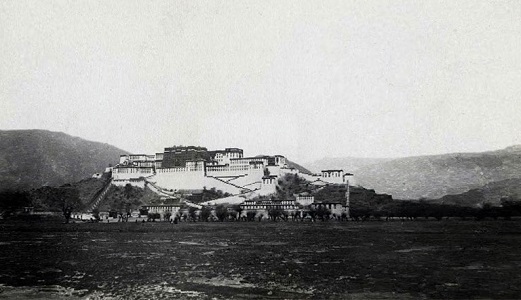 In the year 1645, the Fifth Dalai Lama – Lozang Gyatse launched the reconstruction of Potala Palace which remains as the present structure. 3 years were spent to finish the external structure, while the interior, including the decoration, took 45 years to complete. In 1649, Lozang Gyatso moved government from Drepung Monastery into the Potrang Karpo which is more famous as the White Palace. The expansion carried on. The famous Red Palace, or the Potrang Marpo was built between 1690 to 1694. The later successors after the Fifth Dalai Lama also set Potala Palace as winter palace, expanded its scale and renovated. 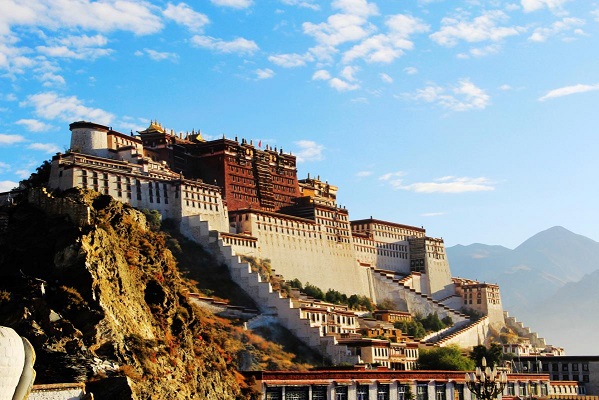 Today, the Potala Palace still keeps its holiness as a Buddhist sacred site. Many precious historical relics are collected in the Palace and opened for publics. Each day, the devoted pilgrims attend the Kora around the site. Tourists come to admire the beauty of Potala Place from all over the world.

The Potala Palace is built the Red Hill as a large ensemble of castle-like palace. Standing 117 meters high with 13 storeys, the palace rises upwards from the foot to the top of Red Hill. Vast and large white walls support the body of palace. The upper part is bestrewed by swarms of widows. The roofs are flat, and vary at levels. The main body of complex is divided into White Palace and Red Palace. 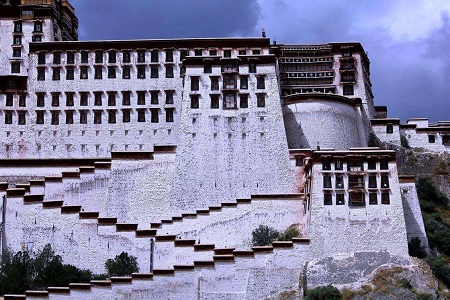 The White Palace, or Potrang Karpo is famous for its white outlook. It was built by the Fifth Dalai Lama, and used to be the residence also office of the Fifth and later successors. The Thirteenth Dalai Lama extended the White Palace to today’s size in the early 20th century. There are living quarters, offices, meditation house, reception room, etc. The White Palace has 7 storeys. The top one is the personal living hall of Dalai Lamas. The fifth and sixth are used for working and other daily affairs. The forth storey has one of the most important halls of Potala Palace - Coqen Hall where houses the throne of Dalai Lamas. Many important ceremonies were held here. 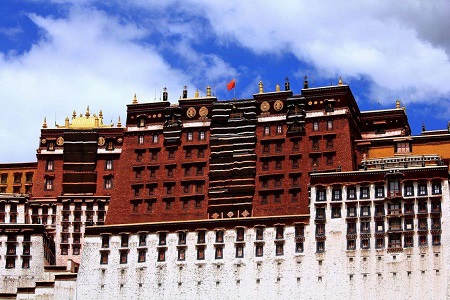 There are 8 golden stupas inside the Red Palace which contain the mummified bodies of deceased Dalai Lamas. Among all the stupas, the central one is the most important the stupa for the constructer of Potala Palace – the Fifth Dalai Lama. About 15 meters high, the Stupa of Fifth Dalai Lama is built of sandalwood, and resplendently coated in 3,727 kg solid gold and studded with 18,680 pearls and semi-precious jewels. Three stupas of other Dalai Lamas were built around, including the Twelfth Dalai Lama, the Tenth Dalai Lama, 13th Dalai Lama.

Phakpa Lhakhang Hall and the meditation cave Chogyel Drupuk are the oldest architectures in the Red Palace which were built the reign of Srongtsen Gampo (7th century).

▶Arts and Relics Inside Palace

It is no exaggeration to say the Potala Palace is a palace of treasures. The long history, important role of political and religious center for centuries helped the palace to collect numerous precious articles and artifacts around the Tibet.

Buddhist sculptures, wall paintings, Tangka and other relics of Buddhism are the most featured. They were built or made centuries ago, and decorated with gold and jewels. The Potala Palace also keeps thousands of rare original Buddhist scriptures.

More things about the Potala Palace

Most region of Lhasa city lies on the northern side of Lhasa River. The Potala Palace is conveniently located in the central city – Beijing Mid Road of Chengguan District. The site, including the huge square in front and a large park near to back, covers a large area for locals and tourists to walk around. Tourists usually accommodate at nearby regions where one can easily walk to see the Potala Palace.

Classic visiting route is a one-way visiting from the front entrance to the exit gate on the back of Palace. Travelers usually enter the gate, and pass through ticket office, then start to climb several zigzag steps to the gate of the White Palace. Visit the living quarter and office area of Dalai Lamas in the White Palace. Then you will explore inner chapels of the Red Palace from the top storeys to the lower. Last, you will exist the Red Palace from the back door. Go down some steps, you will get to the exist gate of Potala Palace.

March to October is the best time to visit Tibet. While, Lhasa city is suitable for travel all year around. If you want to explore other region of Tibet, you should avoid the rain and snow season, usually from November to January. The temperature differs in a day, usually low in the morning and evening but high in the noon and afternoon.

Sunglasses and sun cream are always needed to protect from the sunburn and strong ultraviolet radiation in the daytime.

Since the Potala Palace is a holy Buddhist site, travelers are suggested dress respectfully. Wearing hats and sunglasses are not allowed. Take photos are forbidden inside the palace, such as chapels, stupas, etc.

There are four top recommended locations for you to take the best photos of Potala Palace.

First is the large square in front from which you can take the full-face photos of Potala Palace.

The second location is on the Chakpori (southwest of the palace, west of the square) which has a tall stage for you to frame the best scene. In the early morning, many shutterbugs will wait on the Chakpori to shot the amazing sunrise.

The third location is on the roof of the Jokhang Tmple from which one can see the Potala Palace rising among other buildings.

Zongjiao Lukang Park is also a good place to shot the great scenery of Potala Palace, because here you can enjoy the beautiful reflection of Potala Palace in the lake water.

Your passport should be carried with you to collect the entry ticket which is reserved by passport before visiting. You should also bring the Tibet Travel Permit with you.