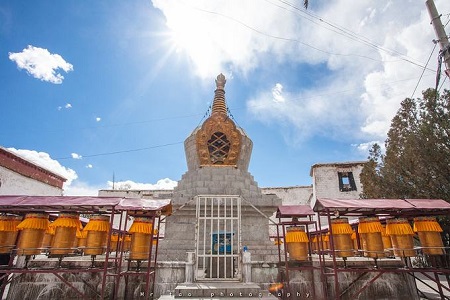 Sera Monastery in Lhasa is one of the "top six main monasteries of Gelug Sect of Tibetan Buddhism" and regarded as the "three great Lhasa monasteries" together with Drepung Monastery and Ganden Monastery. This monastery not only is famous for its heated Buddhist debating, but also enjoys good reputation among visitor by its rich Buddhist culture, particular buildings, abundant cultural relics and artifacts, and so on. 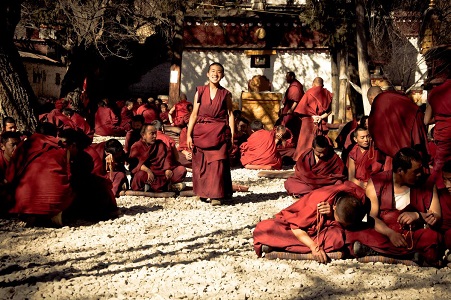 Sera Monastery  is one of three famous monasteries in the city along with the Drepung Monastery and the Ganden Monastery. It is dedicated to the Gelugpa or Yellow Hat Sect, a branch of Tibetan Buddhism, founded by Tsong Khapa. Jamchen Chojey, one of Tsong Khapa's disciples built it in 1419 during the Ming Dynasty (1368-1644). The monastery was named Sera which means wild rose in the Tibetan language, because the hill behind it was covered with wild roses in bloom when it was built.

The monastery is magnificent and covers an area of 114,946 square meters (28 acres). Its main buildings are the Coqen Hall, Zhacang (college) and Kamcun (dormitory). Scriptures written in gold powder, fine statues, scent cloth and unparalleled murals can be found in these halls. Colorful debates on Buddhist doctrines are held here and these employ a style distinctive from those at Lhasa's other famous monasteries.

The Coqen Hall, which was built in 1710, is a four-storey building in the northeast area of the monastery. This main assembly hall where various rituals are held is supported by 125 pillars of varying heights and covers about 2,000 square meters (0.5 acre). 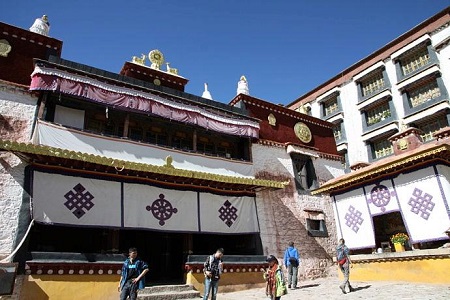 It consists of five chapels which give honor to the Maitreya, Sakyamuni, Arhats, Tsong Khapa, and

Kwan-yin with one thousand hands and eleven faces. The delicate Gangyur of Tripitaka in Tibetan is the proudest possession of the monastery which now holds 105 out of the original 108 volumes. These priceless volumes, the earliest sutras printed by engraving in China, were presented as a gift to Jamchen Chojey by Chengzhu, a Ming Dynasty Emperor.

Zhacang, which means Buddhist College in Tibetan, acts as the arena for the monks to study the Buddhist Classics. There are three Zhacangs in the monastery: Me Zhacang, Je Zhacang and Ngaba Zhacang. The oldest of these, the Me Zhacang, was built in 1419 during the Ming Dynasty and features a well-preserved fresco. In the Je Zhacang the Hayagriva displayed is extremely famous throughout Tibet. The Ngaba Zhacang is the smallest and newest arena where one of its founders, Jamchen Chojey, is worshipped.

Kamcuns are the dormitories where the monks usually dine and sleep. The Sera Monastery has around thirty-three Kamcuns which have a central court-yard. They are comprised of halls to read the doctrine, houses and tea houses. The Kamcuns range in size, as do the number of monks housed in each one. Lamas from the same or neighboring areas of Tibet are placed together in a Kamcun.

The Sera Bengqin Festival is a grand festival held in the Sera Monastery on December 27 of the Tibetan calendar (about February in the Gregorian calendar). On that day, a Dorje Pestle is carried to the Potala Palace. The Dalai Lama prays to the Buddha to confer strength and then he blesses the pestle. Following this, the Khenpo (president) of the Ngaba Zhacang will place the pestle on the monks and followers who believe that the power and support of the Buddha are transferred. Tens of thousands of believers come to witness this event as it only occurs here.

The Gelugpa or Yellow Hat Sect of Tibetan Buddhism studies Buddhist doctrines using a step-by-step process. As a part of their study, lamas must participate in debates to further their comprehension and proceed to more advanced levels of study. The debating traditions in the Sera Monastery are unique among the three famous monasteries in Lhasa. Lamas usually have debates in the special debating field from 3 p.m., Monday to Friday. The debate usually lasts about one hour and a half. It may be conducted on Saturday occasionally because of the ritual ceremony at the same day. For the bad weather or religious holidays, the debate will be unavailable sometime in winter. In a battle of words, they supplement their efforts by using a variety of gestures including clapping their hands, pushing their partners for an answer, or plucking their prayer beads to win the virtue of the Buddha. For a clear view of this unique event, an early arrival is recommended.

Lamas in the monastery

Other Highlights in the Monastery

During the Shoton Festival which runs from June 30 to July 6 in the Tibetan calendar (approximately August in the Gregorian calendar) the Buddha-Unfolding Festival is held. This is a fantastic occasion to worship the Buddha which is open to both locals and tourists. The only celestial burial place in Lhasa is on the hill behind the Sera Monastery. However, visitors are not permitted to witness a celestial burial due to the local customs.

Get to Sera Monastery

2. The taxi can also take you there, and the fare is around CNY 15, however, you can bargain with the taxi driver.