The Zigong Dinosaur Museum is located in Dashanpu at Zigong City, on the banks of a river that flows through the western-China province of Sichuan. It is China's first museum located at the actual burial site of dinosaurs and it covers 25,000 square meters. 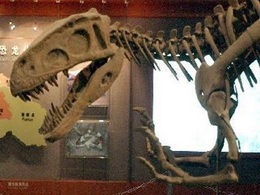 'Sichuan's dinosaurs are numerous and one finds a veritable nest of them at Zigong.' Zigong is a famous city for salt production, but it is also an important dinosaur fossil region in China. As a famous saying goes, one finds a veritable nest of dinosaurs at Zigong. There are more than forty locations within the city at which dinosaur fossils from different eras have been found. A very considerable amount of fossilized dinosaurs has been excavated here and other vertebrate fossils have been found as well at the same sites.

The concentration of buried fossil remains at Zigong is greatest at Dashanpu. A great quantity and diversity of types is found here, including specimens that are quite rare and relatively well preserved. This place is eleven kilometers to the northeast of Zigong City. It was discovered in 1972. The fossils are in a sandy layer of the Meso-Jurassic period, from around 160,000,000 years ago. In an area of around 3,000 square meters, more than 100 individual dinosaurs have been excavated, among which some thirty are complete or relatively complete dinosaur skeletons. Especially valuable is a group of dinosaur skulls. At present, only around twenty percent of excavated dinosaurs in the world belong to the Jurassic period, and most of these are from the late Jurassic, lacking the early and middle stages that show how dinosaurs evolved. At Zigong, especially at Dashanpu, the fossils come mostly from the early and middle periods, so that this provides extremely valuable material. 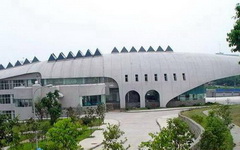 the immediate site. The exhibition is divided into three parts:

Part 2 introduces the group of dinosaurs from Dashanpu. In a large space, viewers can see dinosaurs that stand 10 meters high and are 20 meters long, as well as tiny dinosaurs.

Part 3 is the actual site of dinosaur burials, in an exhibition area of 1000 square meters. This has dinosaur bones in their original setting. Observers can look down from a railing above, but can also go down into an underground room and touch the fossils of ancient life, see the circumstances of the layers and the ores, understand the wonders and marvels of the creations of nature.