Location: in the northern part of Wulingyuan Scenic Area in Hunan Province

3,Free entry for children below 1.3 meters but they need to pay CNY 65 for the battery car.

2. Tourists can pay CNY 3 to buy the insurance. 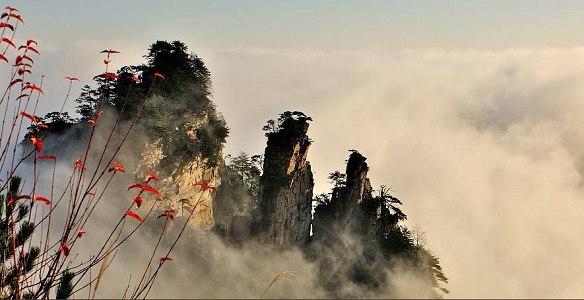 Tianzi Mountain Nature Reserve is one of the most beautiful scenic spots in Wulingyuan. There are four wonders: the Sea of Clouds, the Radiance of the Moonlight, Rays of Sunshine and the Snow in winter. Reaching the top of the mountain, you could see the whole and complete majestic views of Wulingyuan Scenic Area. These Avatar Mountains give a feeling that you are in the movie.

Tianzi Mountain is not only known for its spectacular scene, but also for the beautiful history. It is named after the farmer Xiang Dakun of the Tujia ethnic group, who led successful local farmers' revolt during the last years of the Southern Song Dynasty and called himself "Tianzi". There are many sites about his story like the Yu Bi Peaks, the Xian Nv San Hua, and the Shen Bing Ju Hui.

Tianzi Mountain provides charming views of peaks, which rise one after another. It is known as 'the Monarch of the Peak Forest'. At the top of the mountain, visitors can see the full extent of the Wulingyuan Scenic Area. Beautiful scenes of the mountain greet visitors in different seasons.

Just like Suoxi Valley, Tianzi Mountain was formed by sedimentary rocks 318 million years ago. Those rocks, eroded by the water and wind, slowly turned into quartz stones, finally  formed those amazing peaks in the scenic area.

Tianzi Mountain takes its name from a man, Xiang Dakun. He was the leader of the Tu ethnic group during the last years of the Southern Song Dynasty (1127 -1279). Xiang Dakun led a revolution and named himself as Tianzi (Son of Heaven). Visiting this scenic area, visitors can see many sites about his story, the most impressive being: the Yu Bi Peaks, the Xi'an Nü San Hua, and the Shen Bing Ju Hui.

With pine trees on the top, the Yu Bi (imperial brushes) Peaks rise upward into the sky. Legend goes that they are brushes the Tianzi-Xiang Dakun used that became stone peaks after his martyrdom. The Xi'an Nv San Hua (floral tributes by fairies) is slightly opposite the Yu Bi Peaks. A legend goes that Xiang Dakun and his army were defeated to fall back on the Tianzi Mountain. He fought to the finish, but finally jumped off the cliff. A girl in love with him went across the mountain to search for him. She strewed flowers over the cliffs and turned into a stone statue. Shen Bing Ju Hui is a forest of soldier-like peaks arrayed for a review. 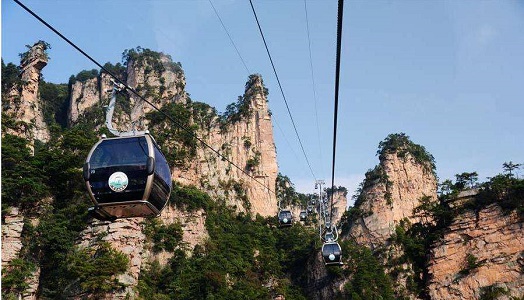 Visitors can take a cable car to see these charming peaks. With 692 meters' (about 2,270 feet) difference in elevation, the aerial tramway is 2,084 meters (about 2,279 yards) in length. The minimum running time is six minutes and twenty-two seconds for a single trip during which visitors can keep the wonderful scenery of the Tianzi Mountain in view.

The yearly average temperature is 12 degrees centigrade, and annual average rainfall is 1,800 millimeters. There are around 240 frost-free days. The best months to explore this mountain are April, May, September and October.

Get to Tianzi Mountain Nature Reserve

Zhangjiajie Central Bus Station (to the northwest of Zhangjiajie Railway Station) has regular tourist buses to Tianzi Mountain and the bus tour costs about 80-90 minutes. Then take battery car inside the scenic area.